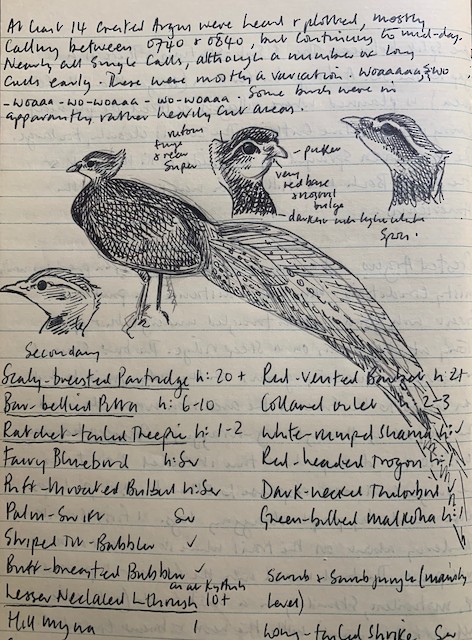 At least 14 heard and plotted on map. Mostly calling at 07:40-08:40, but continuing to mid-day. Mostly single calls, although a number of long calls heard. Some birds were in apparently rather heavily cut-over areas. 1 male seen well for 30 mins, in predominantly misty conditions (which helped me remain concealed from it perhaps). Watched at a distance of 20-25m in partly cut forest with good, rather tangled undergrowth & quite stoney ground, on a steep ridge at 510-520m asl. The bird seemed to have a dancing-ground on the ridge trail, but it was hard to be sure, as the area was worn-down all the way along, through 'log-dragging'. Observed at 10:15-10:45, during which time it called 3-4 times - the single call, in response to other birds, and perhaps even the noise made by people dragging logs. I first saw it wandering about on the trail where it reached a more level peak. It then moved into the forest, where I picked it up again, standing motionless on a low branch only a few inches off the ground, with the neck and breast concealed. The head was visible throughout, and when calling the head was tilted back. There was occasional preening and crest-raising.