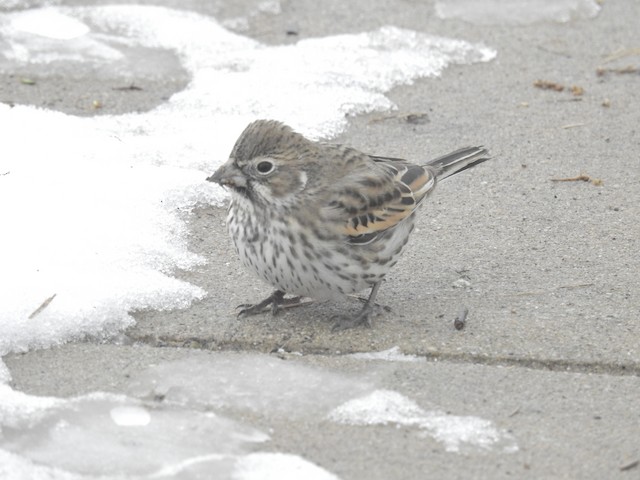 Through the help of Nick Anick, Peter Weber and Joel Trick, the bird I recorded to be a Vesper Sparrow was posted in error. My initial reaction to seeing the bird was that it was a Lark Bunting, but that just seemed too improbable for this area. And, the buffy wing coverts seemed inappropriate for the Lark Bunting. So, I inappropriately dismissed the Lark Bunting from consideration. But, many photos of female Lark Buntings provided by Nick, Peter and Joel, made it clear I had misidentified the bird. And, the bill, shape size and color is just not correct for the Vesper Sparrow. The molar mark, although not as pronounced as in some of the supporting photos, is consistent with the Lark Bunting. The tail feather appearance is inconclusive. Often when feeding, the bird would raise its crest, a behavior I have observed in other Lark Buntings I have seen. Unfortunately, the bird has not been seen again.