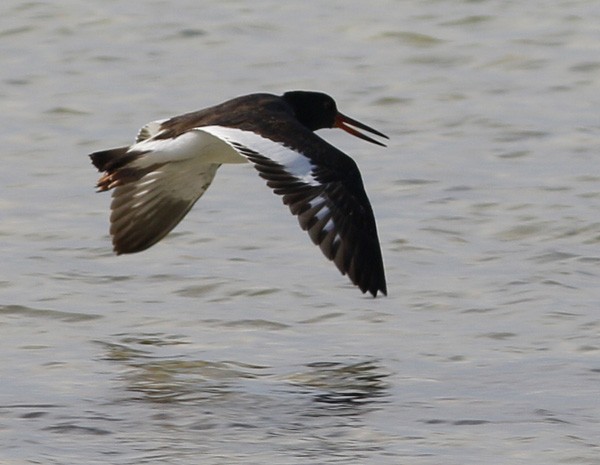 Large shorebird, orange thick/long bill, dark back, white underside, white stripe through the secondaries when it flew and a few white spots in some of the early primaries, black terminal band and white upper tail. These data were gathered as part of the Florida Keys Hawkwatch (FKH) migration monitoring project by official FKH 2015 counters (vetted and experienced migration monitoring field technicians: Rafael Galvez and Ted Keyel). For more information about project history, protocols and methods visit the projects official website: floridakeyshawkwatch.wordpress.com. For a complete yearly report, email taspublisher@gmail.com. All avian species as part of this project are monitored from two sites in the Middle Keys. At Long Key State Park, by morning flight surveys and transect counts each morning from September 1 through the mid-November, during which all detections are documented by distance, habitat use, behavior and number of individuals using standardized protocols. All avian species are monitored from Curry Hammock State Park (CHSP) during that same time period, in a daily sequence of 7 to 8 point counts, using methods standardized for the site and in use since 1996. Counts take place from 09:00 to 16:00 DST, and all bird detections are documented for species and number of individuals. Raptors are additionally documented to include age, sex and any other plumage or morphological details for each individual when detectable, in addition to flight direction, lateral distance, flight height and flight path; only southbound totals for the entire duration of the daily count per site are included here (CHSP minimum 7 hours each day). Every hour, wind direction and speed, temperature, sky conditions, flight details and observer information is logged into standardized forms. Data are carefully entered into eBird after being scrutinized and reviewed on paper data forms by the official technicians only.