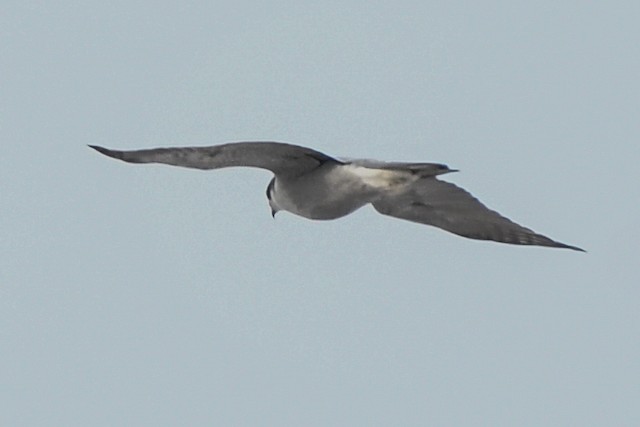 The photos seal the deal. All the experts we showed this to have come to the same conclusion without any influence from us: Adult Plumage Northern Goshawk. I was with a very experienced birder when we saw this (Willie D'Anna). After discussions in the field we narrowed it down to Light Morph Gyrfalcon, Northern Goshawk, or something with a pigment disorder. Willie - as a pro (an ebird reviewer for the area) wanted to get opinions from top raptors guys and gals in the country before confirming. Plus it is a LIFER for me, so I didn't want a dirty life bird unless the photos were conclusive. Luckily they were! IN THE FIELD: I saw what appeared to be a larger raptor take flight from a tree in the middle of a wooded area with low brush and a few high trees. I never saw it perched but it appeared to be trajectory launching from the nearby large tree. After rattling some thoughts through my head my impression in the field was large, bulky accipiter. Its wing beats were powerful, and seemed stronger than any accipiters I had seen prior. The wings seemed to have a wide range of motion as well. Willie's first impression was also large accipiter. Which was the first thing we discussed after the sighting. Only field marks I noticed were slate grey on the back of wings and how it was flying. I was mostly focused on the flight pattern because it seemed odd to me. Also noted the wings seemed too long and tapered for Buteo. Willie got it in the bins as it cut through the trees. Realizing there was something different about the bird I quickly switched to camera (Willie said "Yeah - get pics if that if you can!") and tried to focus but only got on it from one angle - rear quarter. These are the photos I got. You can see in two zoomed in images: 1) A black streak through the eye. Willie thought he noticed it had a black cap in the field which would eliminate Gyrfalcon. However, he said he did not notice the white eyebrow, but that might be hard to see at distance and angle. 2) What appears to be an all white underside isn't really. In the other zoomed in photo you can notice a light grey underside which changes to white undertail coverts. This is a diagnostic trait of NOGO. 3) All other field marks are consistent with NOGO, and habitat is better for NOGO as Sibleys states Gyrfalcons can be confused with Northern Goshawks, but "Gyrfalcon favors open country (NEVER in the woods)". This bird flew from woods and towards woods. 4) White morph Gyrfalcon would not be slate grey on top. You can see the slate grey top in several of the photos. 5) Notice powerful stocky body, long tapered wings I shared it with the Raptor ID page and it was conclusive there as well as NOGO.