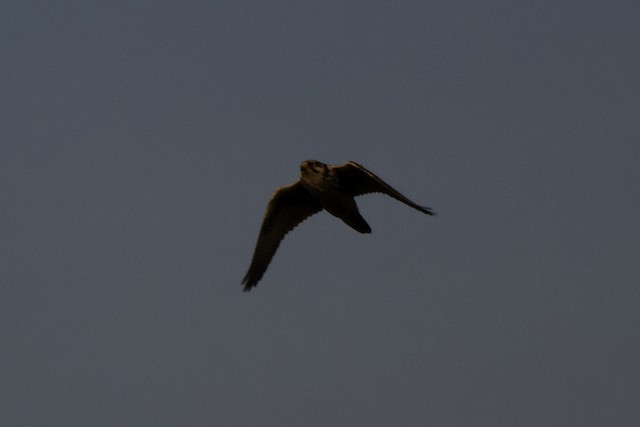 When I first noticed this falcon I was about 1/3 of the way down the drive from River Road. In the past I've seen kestrels here, and that's what I was looking for. Or perhaps a Merlin since one is known to winter just down the road. At first, with a naked eye view, I suspected this falcon was a merlin. However, after looking through the binoculars I thought it was too light in color, bulky, and the thin dark malar stripe seemed too off for Merlin. After getting out of the truck and setting up my scope I started thinking it looked like a Prairie Falcon, but didn't believe it. In addition to the thin malar stripe a white supercilium was visible and the base of the beak was yellow. Then I thought maybe it was a "prairie" Merlin, the lighter colored one we rarely see in Kentucky. After about 10 minutes it took off and flew south. In flight it appeared much bigger than I originally thought, and I looked for the dark coverts and auxiliaries, which were visible! Prairie Falcon! See attached photos. Several folks searched for it the rest of the afternoon with no luck until finally it was observed one other time late in the day.