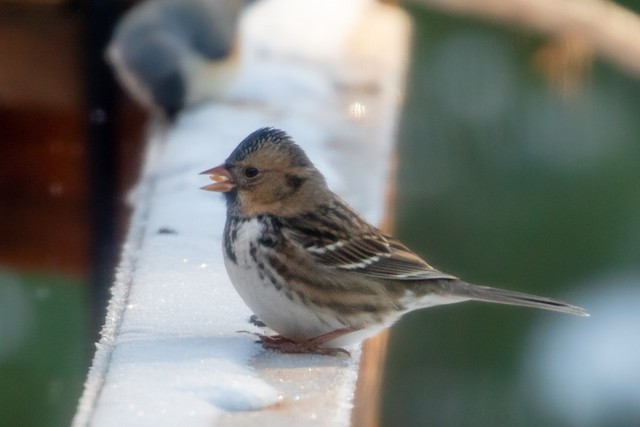 First found 6 December by Carol Belanger and seen yesterday by her and several others. This striking and large sparrow first showed itself today perched facing us in the trees behind the house. Later it landed on the deck railing and then on the snowy ground to feed on seed put out for birds. Viewed head on, the snowy white underparts set off by rich brown flanks and dark flank streaks, triangular bib of coalesced black blotches, blackish crown, and bright, orange-tan cheeks were most striking. The bright pink beak stood out as well and was thinly framed with black. There was a dark spot at the rear auriculars in the field of tan color. This was a medium large sparrow, with a somewhat large head that was occasionally moderately peaked. The tail was dark. The back was striped and vaguely showed two paler lateral braces. The wings were dark with two thin white wing bars. The eye color was not noted but appeared dark; the legs and toes were brownish pink. We noticed the bird tucking and seemingly favoring its left leg. The stance of this bird was typical of Zonotrichia sparrows, being perky and upright at times with tail slightly cocked. It chased off a titmouse on the same railing. Given the nearly completely black crown and extensively black bib, this would appear to be an adult, and males tend to be more extensively black, so perhaps that sex (but overlap in extent of black suggests assignment to gender not certain). This is a very rare visitor to Maine and the Northeast. I have seen the species numerous times in California, during winter in Oklahoma, and on the breeding grounds near Churchill, Manitoba.