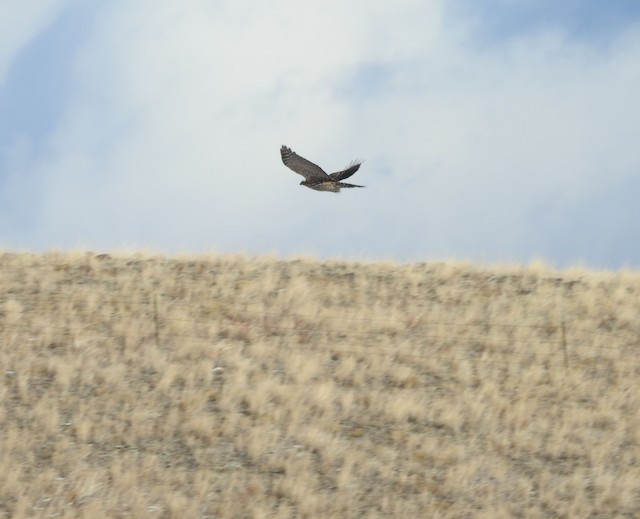 First observation at 1258. 1 counted on property. Juvenile. First seen when it apparently from from the stream corridor in reach 1, W of WIFL Flats. Accipiter with long but blunt wings and long tail; wingbeats seemed snappy. BBMA made alarmed calls. Seen soon after, perched in reach 2 in a shrub along the stream. RTHA size, with broad, banded tail, streaky breast, and relatively small head. Was there for a minute or two, then flew E along the stream and apparently landed again in reach 2 or 3. Spotted it again at 1323, perched near the E side of the west-most pond in reach 3. Spread wings and appeared to preen. Ca 1329, as we were about 100 m away on the far side of the pond, it flushed and flew north and then NW with powerful, heavy wingbeats. Continued to the vicinity of the red house near the conifer ecotone at the base of the Scratchgravels ca 1 km N of us, then flew E past a nearby brown household and landed in the top of a Pinus ponderosa at the Scratchgravel conifer edge. Detections (number 15-minute intervals in which the species was detected): 3 on property.