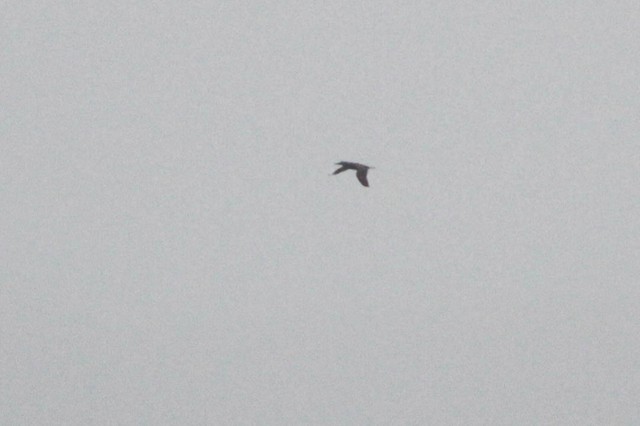 ***mega; subadult with fairly well-marked belly showing little contrast with breast that flew in from south to join feeding flock of Northern Gannets and Laughing Gulls and studied for 15 minutes in direct comparison to the gannets. I then lost it suddenyl and suspected it sat on the water, which was confirmed when I picked it up again 10 minutes later and watched it loop a couple times before flying E past the point with a gannet. Unfortunately, I ended up digiscoping the gannet that time! A comparatively small and slender Sulid, with narrow wings and a long hand. In direct comparison to gannets it was perhaps 25%-35% smaller. It often few low in the flock, hovering in pace with fairly rapid flaps, unlike the gannets which mostly few higher and were wheeling about (although later some gannets were seen to make laborious hovers slightly higher in the flock). The very long, slender tail that tapered evenly from the rear of the wings was especially striking since gannets look chunky at the rear and then have a long tail that appears stuck on the body. Several aspects of the flap were unlike gannets, the first being small scale adjustments that it regularly did by adjusting the primaries and the angle of the "hand". The flaps were deeper than gannets and when flying low to the water it flew on a very bow-winged glide which was one of the first ways I picked it up. Plumage was overall dark, with even dark color above and no paler edging (as on juvenile gannet) and no pale band on the rump (as on juvenile and subadult gannets). From below, it was dark around the head and upper chest and also dark on the belly with scattered white flecking (maybe taking up 20% of the plumage) on the belly. This did not give a striking appearance of a dark chest contrasting with a pale belly but that effect could be seen in the best views. The underwings had some pale in the underwing coverts. I attempted numerous digiscopes (including video) and also some SLR photos but this was a frustrating subject since it changed direction frequently and sat on the water once or twice. The result was that I often tried to catch the bird with the video and then "missed". My last digiscoping attempt. I think the resultant images are diagnostic in conjunction with one another, but they are not strong or excellent photos! As mentioned above, it was easy to accidentally get on the gannets instead. If accepted, would represent the first record for Bristol and personal first for October and first self-found in Massachusetts.