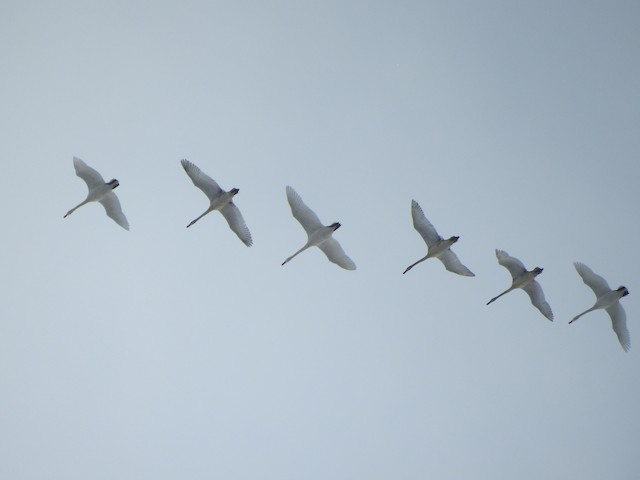 First observation at 0928. In the first half of the survey, most sightings were of a few individuals leading a group of Tundra Swans, generally nonvocal but distinguished from the Tundras by obviously larger size within the flock. After 1300, anatid movements seemed to decrease, but Trumpeter Swans were dominant, often with a few Tundra Swans mixed in. At this point, we heard very few Tundra Swan vocalizations but more calling from Trumpeter Swans. As with the Tundras, most flocks were flying overhead, going south or ESE. Often we would spot a flock before it was overhead but would not hear vocalizations until the birds were overhead or farther south - apparently due to the lag between transmission of light and sound. The first 28 individuals were tallied without distinguishing them by group. After 1115, the following groups of TRUS passed (in chronological order): 26, 25, 30, 1, 20, 16, 2, 10, 10, 26, 32, 16, 10, 37, 11, 22. Along with the groups of TUSW led by Trumpeter Swans and noted under TUSW, at 1331 we saw and photographed 20 TRUS flying south overhead in a group with 2 CANG and 1 SNGO. At 1536 Shane got photos of a group of 10 TRUS flying over reach 4. At 1609, Shane got photos of a group of 22 TRUS. Detections (number 15-minute intervals in which the species was detected): 14 flyover(s).