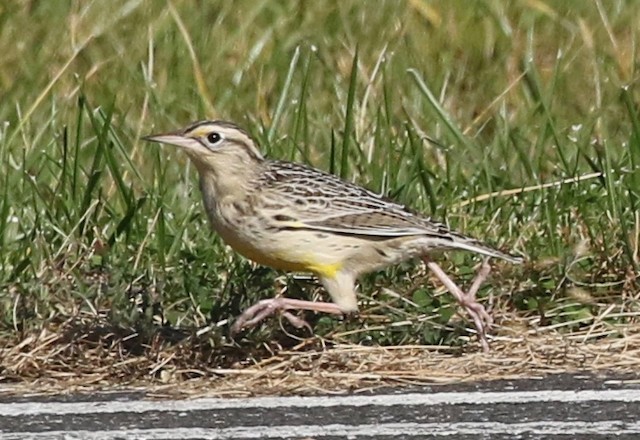 Discovered yesterday by Tina Green and relocated today by her and John Oshlick. During my visit, I relocated this bird in the 6-8" high grass fields surrounding the model airplane field. I was soon joined by George and Jacque Masumian and later by Gilles Carter. With patience, this bird and at least two Eastern Meadowlarks walked through the grasses, feeding, and eventually came out onto the edge of the paved tarmac, affording full views. The temp was 65F and the sunlight was perfect for viewing and studying the flock of Meadowlarks, and for photos. This bird stood out by being overall paler and quite gray on the upper parts, compared to the adjacent warmer, browner Eastern Meadowlarks. It appeared slightly smaller and slimmer, lacking a "pot-belly". Other diagnostic features seen (and exhibited in photos) include: the white flanks (vs creamy/buffy on EAME) with limited dark spotting (EAME has more bold dark streaking), less contrasty crown stripes consisting of some brown streaking (more solid black on EAME), narrower dark barring on secondaries and on tail feathers, the yellow on the breast and belly was paler, the black V on the chest was pale and mottled with white and was fairly narrow, the throat was very pale yellow but it seemed to extend into the submoustacial (at least in some views). Also, the amount of white in the outer tail feathers seemed less than on the several EAME.