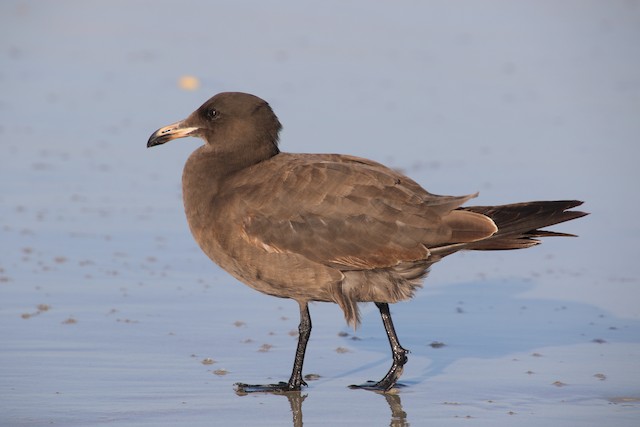 FINALLY!!! Details and photos TBA. List was started at Cherie, but HEEG was at the shoreline next to the jetty and lifeguard station. Will provide more photos and detail later. I have driven likely over 30+ hours going back and fourth trying to find this bird... yesterday, I decided to give it another shot after finding the HUGO up in Duval. I started the search at the shoreline of Cherie park. The pier was to my South, and to my North was the jetty. I could see a flock of birds maybe half a mile North of me. Birds were moving North, so I decided to ignore the pier and pray he wasn't there... After reaching the flock of birds, I took my post. Good movement of birds streaming from the South continually added to the flock numbers. As with Siesta, innumerable beach jerks would flush the group, either coincidentally or deliberately. Birds mostly resettled each time, thankfully. I could see a smaller group of gulls at the Jetty end, and kept a watchful eye on that group. No dark bird was seen among the grays and whites. Only a couple darker HERG passed to get me excited for a moment. I had been standing there for close to an hour now, and I could see the group growing in size. A distant charter was seemingly finishing up, and I could see hundreds of birds streaming behind. The Jetty flock was growing immensely, but as birds were flushed, most made their way down to me. No HEEG, though... then I looked back at a smaller flock. Birds were being fed and flying and landing in different areas. I saw something dark. VERY DARK. Snapped a shot... zoomed in.... after that, my heart rate probably rose into the 180's, and at that point I cleared about a half mile or so in about 0.05 seconds, breaking Bolt's top running speed by 15 mph minimum. Every nearby beach goer was put immediately into shock by the sheer intensity emanating from the psycho bull charging up the beach, bins and camera in hand. Solemnly swearing this day would be the last of any child foolish enough to push the bird away the beach, I closed in. There he was! I finally got my chocolate boi! Such an inviting and carefree gull! Enjoying the sun, surf, and free handouts. He was unfazed by kids chasing him, and would come back in within a short distance as quickly as he was flushed. Other gulls would take off, and he would remain, choosing to run rather than take to the air. Great way to finally find this guy! For those chasing, I believe the bird came from the North military base or offshore North of me. At one point a very large group of birds flushed from the North base shoreline and birds went South to the Jetty shoreline or out to see. I did not note any darker gull that passed me coming from the South other than a couple immature HERG. He seems to be hanging around the Jetty more consistently, and especially that general area. Curious to know if he still travels down to the Melbourne area much anymore. Hopefully he sticks like the Gulf HEEG so we can watch his transformation through cycles to adult.