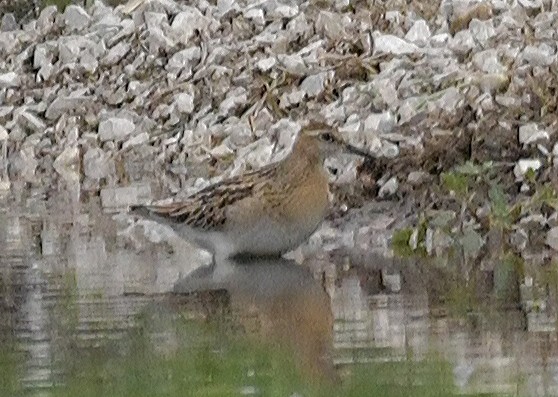 Congratulations to Roger and Reuben for finding this bird in Grassy Cell C-1! The bird offered a much closer view than the bird here in 2016. Similar in size and shape as the Pectoral Sandpipers it was with, except for maybe it having a slightly more rounded belly. Field marks most noticeable through a scope were its rich buffy breast, vivid reddish crown, bright white eye brow, dark bill, greenish legs. The nearby Pectorals had brown crowns, lighter colored bills, and a heavily streaked bib contrasting sharply with the white belly. Foraging behavior of the two species was similar, picking from the surface or probing in the mud, although I saw the Sharp-tailed submerge its head in the water slightly more often than the Pectoral. Another behavior observed was the Sharp-tailed Sandpiper’s response to starlings coming close. The bird would often retreat and remain hidden for several minutes. Several of my photos showed the tertial edges with more rufous than those of the Pectorals. I did not see the bird in flight, although it opened its wings briefly, showing a thin white wing stripe and a dark central tail. Due to windy conditions, no tripod and the distance, I have documentation photos only, but this was an excellent opportunity to compare the two birds.