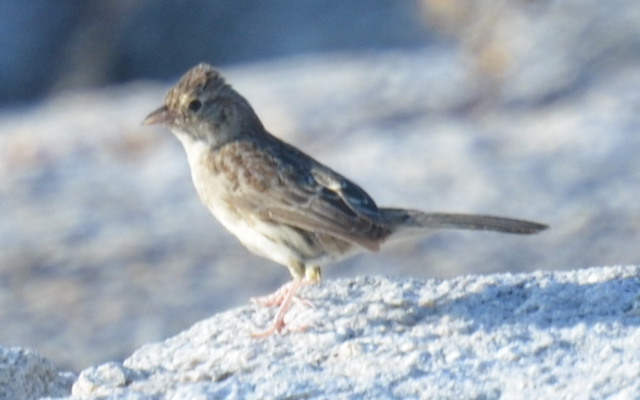 An extremely challenging bird owing to its furtive nature. It's behavior would make a saltmarsh sparrow proud, remaining hidden in dense scrub until one got within a few feet, whereupon it would flush and fly 10-15 yards low over the vegetation before dropping to the ground and immediately finding cover. Repeated naked eye views obtained of it flying above the scrub before disappearing into the vegetation, until it eventually flew out onto the rocks, providing perhaps 45 seconds to observe and document with photographs at a distance of approximately 60 feet. Most of the information relevant to its identification must be gleaned from the photographs, though I can add from personal observation the following details that were obvious from the repeated flight views. Very obviously a sparrow owing to size, behavior, and general coloration. Slightly larger than a Chipping Sparrow, with a noticeably long tail relative to its body, compared to Song Sparrow. This was obvious even with the limitation of poor flight views. The coloration was fairly uniform but distinctive, best described as sandy brown, with grayer tones in the brown cast than would be apparent with song or chipping sparrow. I specifically sought to determine the presence or absence of white on the outer retrices and am confident that I saw this on several occasions. The brief views preclude me from offering an opinion on the extent or exact coloration of the "whiteness" other than to say that it was present but limited and nowhere near as obvious as on a junco, perhaps closer to an American Pipit.