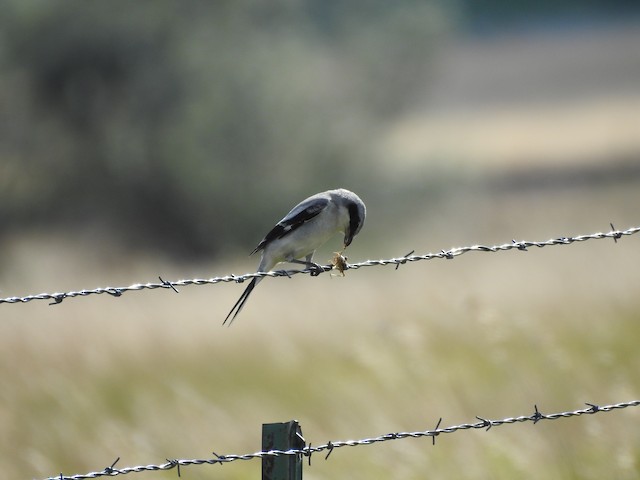 First observation at 1507. 1 counted on property. Studied carefully in the field and later from photos. Identified by combination of relatively small hook on bill, black mask clearly extending above the eye, and lack of barring on the breast. Expected species for this time of year, but on the late end of the season and also quite rare on this site. First seen perched on a metal fencepost about 10 m SW of the start point. At 1511, it flew down ca 20 m NW to the gravel road and then flew up to another metal fencepost about 50-75 m south with a grasshopper, which it proceeded to eat. A WEME was on one of the other fenceposts immediately SW of the shrike but took off ca 30 seconds after the shrike landed. At 1519 I saw it capture a second grasshopper, dropping down immediately below where it was perched on the fence. At 1541 it was still in the same area and caught at least 2 more grasshoppers. With one of the captures, I definitely observed it using a barb on the fence to hold the grasshopper while manipulating it with its beak. It was still within 100 m of the start point at the end of the survey, and I observed it capture at least 1 more grasshopper and impale it on a barb before eating it. Detections (number 15-minute intervals in which the species was detected): 5 on property.