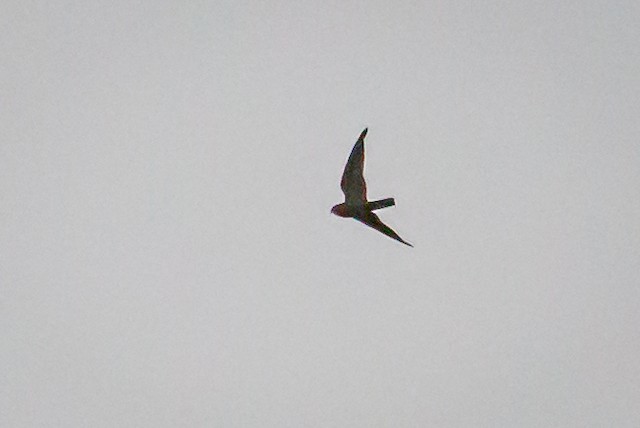 At 7:39 while the crows were coming in to roost, this LENI was seen flying through many crows on a path towards the ocean. Erratic flight compared to the crows. DR adds these details: "We arrived at 7:15 p.m. at a time the crows were starting to congregate in the hundreds. We stood around at the spot the Roses had flushed a nightjar in the morning. The nighthawk appeared at about 6:38 p.m., just after sunset, and flew over our heads, heading west and kept flying until out of view. It was an obvious nighthawk with long, slim wings bent at the 'wrist,' and a swift 'bounding' flight on rather quick deep wingbeats. The bird looked mid-level gray in color to me and despite efforts I could not see the white bar on the outer half of the wing that I expected [but see below]. Having just seen Common Nighthawk flying in the day a couple weeks ago in Modoc Co., I felt this was a Lesser because it looked small to me, the wingbeats were more rapid than Common, the tail was short and the entire bird looked 'skinny' (and thus lighter in weight than Common). Also, Common should have a prominent white bar on wing. This bird did not vocalize. [Lesser is by far the more expected species here.] Later I looked at Carole's photos. I see 1-2 long, retained outermost primaries but much shorter inner primaries, suggesting the bird was in active wing molt. Such active molt would account for the 'missing' bar on the primaries as it would be fragmented. BNA states that Aug-Sep is the peak dates for active primary molt in North American populations of Lesser Nighthawk. Active primary molt suggest an adult individual."