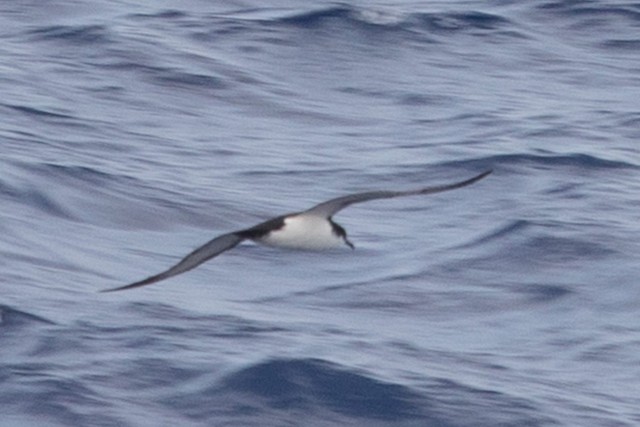 Sighting time was late afternoon at 17:45 in cloudy conditions. The bird was spotted close to the ship flying in opposite direction, quickly banked and flew away until lost. Visual impression was of an all black above shearwater with a rather fast and purposeful flight low above water, seemingly larger than a Bannerman's Shearwater. Pictures show an all dark upperhead pattern concolorous with mantle and a rather clear cut separation with white underparts, no white insertion behind the eye nor a dark neck side patch like Bannerman typically shows. Body appears rather bulky, wings rather long and pointed, tail rather long and bill slightly larger as well in comparison to Bannerman. Newell's Shearwater has been recorded around 5 times in Japan so far, including one bird rescued on Chichijima (https://teien.tokyo-park.or.jp/nature/ogasawara/…/38411.html) and one bird photographed at sea by the Tanois here (http://seabirdsjapan.zohosites.com/newells-shearwater.html). Neil Davidson also photographed a presumed bird here (https://birdingkyoto.blogspot.com/search?q=newell). We were 12 birders on the deck and 4 of us obtained pictures. Observers also included Yoshiya Odaya, 中村咲子, Yoshikiyo Suzuki and Takumi Yamamoto. All the pictures taken were posted on a Kantori Facebook thread (https://www.facebook.com/groups/kantori2/permalink/694636781001652/) and all qualified commentators agreed on the Identification. Jeff Davies, a highly experienced seabirder based in Australia, made the following comment : " I agree with Newell's, this is a strongly black and white bird, the blackness of the spot on the underwing just above the humerals(auxillaries) on an otherwise very white underwing favours Newell's over Manx for me. Additionally even the palest underwing Manx usually have a row formed by small dark spots at tips of longest humerals(auxilliaries) and I think some of the shots above are good enough to show they are pure white with no tips. Townsend's typically has small grey centre spots along the inner greater secondary coverts and even a couple on the longest humerals, again this bird is clean white there. The missing auricular is interesting but doesn't over rule the other features I recon."