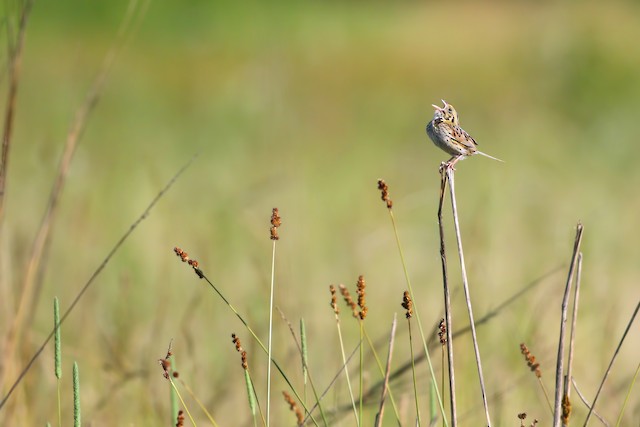 Singing male singing in grasslands along the SW section of yellow trail not far past the two bluebird boxes, just beyond (NW of) the private gravel driveway. HESP sang regularly from three exposed perches during the roughly 35 minutes I stayed with it going silent only briefly during this time. Photos and audio. This individual was singing a 5 note/phrase song which, when close, sounded mostly trisyllabic in the field. It's difficult to say with certainty whether the most complex "single" notes here are technically single notes on the spectrogram or, more accurately, are tight, multi note phrases, though when slowed down considerably there does appear to be some visible energy holding them together. Update (6/23/19): Apparently a Henslow's Sparrow was photographed here on June 6 but was initially eBirded without photos as a Dickcissel and then later as a Savannah Sparrow (no photos) with the correct ID accompanied by photos appearing either last night or this morning, June 23, presumably in light of yesterday's reports.