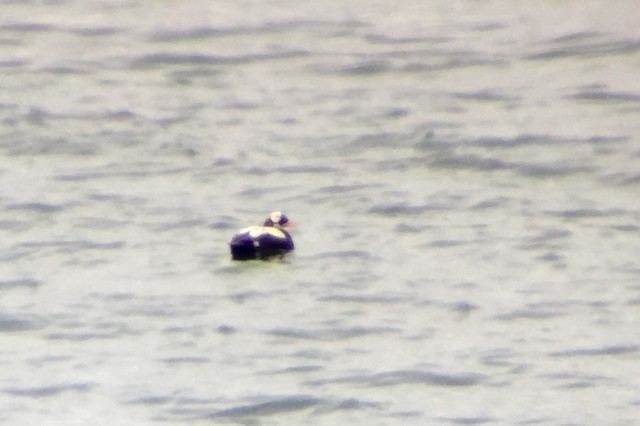 There are dreams, and there are birds, and then there are dream birds. The Spectacled Eider is such a bird. It would be an outrageous, inconceivable rarity for most birders; and no less for Yukon birders, yet we look at its range along the Alaskan Coast and think ... it’s not that far. But the Yukon’s North Slope is as remote and wild as it gets — access is difficult and very expensive. Conditions are rugged and often arduous. I’m fortunate to have a job that takes me to Qikiqtaruk, an island and Yukon Territorial Park off the Yukon’s Arctic coast — a place very close to my heart. The dream of seeing a Spectacled Eider on home turf has been long-held, and today it came to be. I had decided to forgo my seawatch as a robust honey-blond Grizzly Bear foraged on the hillside between camp and my seawatch site on Collinson Head. Instead I opted to bird Pauline Cove; and setting up the scope on the beach just outside my cabin, the very first bird that came into view was the bird. A male eider swam behind a male and female Common Eider, and flashed essence of rare eider. My heart leapt. I re-focused and then seconds later I had a clear view — a brilliant male Spectacled Eider. This was a slightly smaller eider than Common; with a black tail, sides, and chest contrasting with a bright white back. It’s face was captivating; a slender orange bill and bright white spectacled ring around the eye offset by a dark-greenish lore and dark buffy-greenish back of head and nape; with a white chin and throat. It raised up out of the water to flap its wings and showed a black belly and black primaries and secondaries contrasting with white upper wings and white wing linings. A perfect male Spectacled Eider. I took my phone out of my pocket, held it up to the scope and photo-documented this beauty. I hailed Park Rangers Shane Goeson and Danny Gordon Jr. who also enjoyed views of this rare visitor to Qikiqtaruk. The eider was closer to the far side of the cove, so I geared up for the 2km hike around the cove to try for closer photos; and at the same time I could deploy a phenocam for Team Shrub of the University of Edinburgh. All good! On the hike I crossed paths with a family of Muskox and nesting pairs of Rough-legged Hawks, American Pipits, and Peregrine Falcons. I picked out the Spectacled Eider among Common and King eiders as it swam slowly south along the cove. Beautiful views but no closer. Birders who appreciate old-school, soft and distant rarity shots that embody the fleeting nature of these special birds, will likely enjoy these pics. It was a beautiful bird. This is the first documented record of Spectacled Eider for the Yukon Coast.