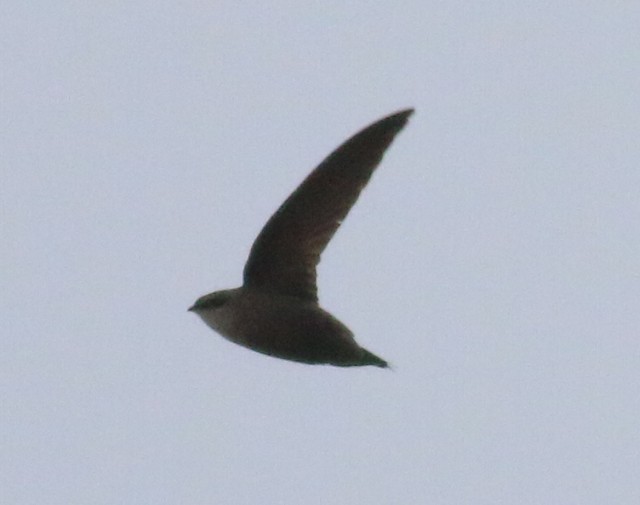 Small, cigar shaped swift, uniformly brown with paler throat. Silent. In the field I had no idea whether this was Chimney or Vaux's. After studying online resources, I started to lean toward Chimney Swift given the long wings and the bulging inner primaries. I asked for a few opinions. Tony Leukering said, "I’d go with CHSW, due to the ss bulge and the apparent lack of a paler rump. However, I’m not all that comfortable with Chaetura." Steve Mlodinow added, "I agree with Tony, looks much like a Chimney Swift. For the points Tony makes and this bird has the lankier jizz of a CHSW rather than the stubby feel of Vaux's." I will add that three days after seeing this bird, I was in Oregon and got to study Vaux's Swift, and it quickly struck me as a much faster-flapping bird than the one I'd seen in Utah, with shorter and straighter-edged wings. For all these reasons, I am now comfortable calling this a Chimney Swift. NOTE: This record was accepted by the Utah Bird Records Committee as the second confirmed record for Utah.