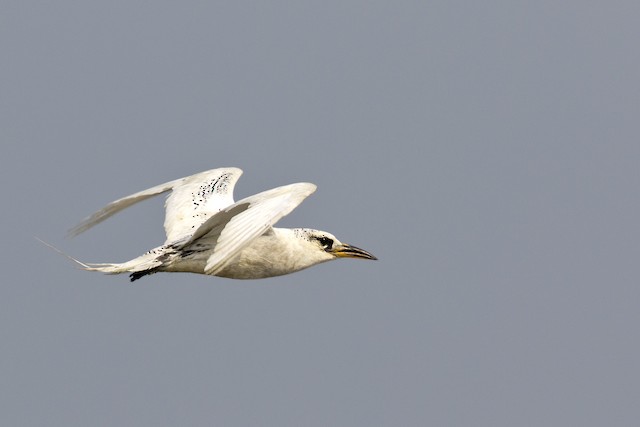 On 4th May, after the cyclone “Fani” had passed through South Bengal, an immature Red-tailed Tropicbird was rescued at a village near Dankuni, Hoogly by Santana Acharya. Later, it was handed over to volunteers from H.E.A.L (Human and Environment Alliance League), who took care of the bird for the next few days till its release on 12th May. After a lengthy online discussion with Praveen J, Dipu K, Rajneesh Suverna, Pete Carr & Don Roberson, it was identified as 1st year Red-tailed Tropicbird. Large bill (7 cm) and fully white primaries were useful in ascertaining the ID. From India, prior to this, there is only a single direct sighting of this species – F. G. H. Allen collected an immature bird that came onboard a ship between the Nicobars and the northern point of Sumatra, and which was examined at the Raffles Museum, Singapore (Gibson-Hill 1949). (Praveen J., Jayapal, R., Pittie, A., 2013. Notes on Indian rarities—1: Seabirds. Indian BIRDS 8 (5): 113–125.) Thus this was the first sighting in the last 72 years in India, first photographic record in India, first record from Indian coast, and first record for West Bengal. The bird was kept in the care of HEAL volunteers for a few days. There were no visible injuries and the feathers were in good shape. The diet in wild is little known, but it is said to consist of shrimp, squid and flying fish. This bird was mostly fed shrimps – which is seemed to prefer over sea fish like Sardines (The experience of a few Goa birders who had rescued a Red-billed Tropicbird in 2017 came in handy. See checklst at https://bit.ly/2LFlL9D ) It had to be fed about 80 grams every 3-4 hours, and it would call loudly when hungry. The total food intake was close to 350 grams – more than half of its body weight. On 6th May it weighed 560 grams. It gradually increased to 685 grams over the next five days. The length of the body was 47 cm (apart from the tail-streamers, which are not fully formed yet in this immature bird). The bird was showing considerable energy during the last few days and in it was decided that a release should be attempted at Jambudweep, an uninhabited island off the coast of West Bengal, under the supervision of forest department. The bird was brought there on 12th May by car from Kolkata, and the forest department organized a boat to the island. Mr. GR Santhosa, DFO South 24 Paraganas, personally organized and led the release party. The bird looked comfortable in the proximity of the sea. It took off by itself, hovered for a few seconds, made a trip to the sea and back, circled over the island once and then finally flew off due South with great speed and confidence.