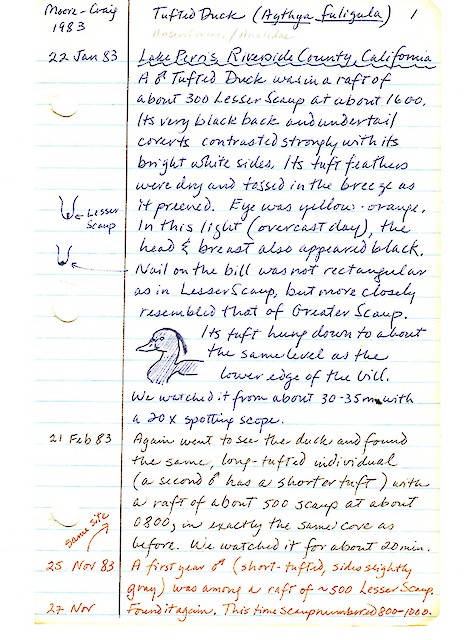 Notes on the Tufted Ducks at Lake Perris, 1983

Earlier this day, Alan Craig found 2 males here. When we both returned later, we relocated one. Citation: Two male Tufted Ducks found on Lake Perris 22 Jan–21 Feb 1983 by Alan Craig were the first to be found in Riverside County (McCaskie. 1983. The Winter Season: December 1, 1982 - February 28, 1983. Southern Pacific Coast region. American Birds 37(3): 337-340). From my notes (see image): "A male Tufted Duck was in a raft of about 300 Lesser Scaup at about 16:00. Its very black back and undertail coverts contrasted strongly with its bright white sides. Its tuft feathers were dry and tossed in the breeze as it preened. Eye was yellow-orange. In this light (overcast day), the head and breast also appeared black. Nail on the bill was not rectangular as in Lesser Scaup, but more closely resembled that of Greater Scaup. Its tuft hung down to about the same level as the lower edge of the bill. We watched it from about 30-35 m with a 20x spotting scope.