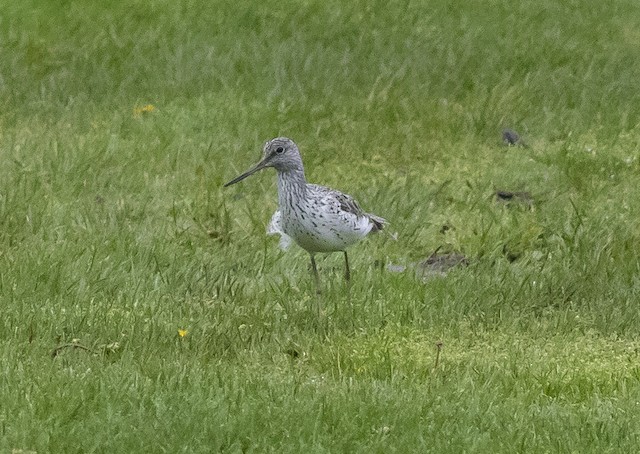 Potential first NY record found earlier in the day by Pat Lindsay, in the same spot where she found a Wood Sandpiper last Spring (a flooded portion of the golf course near parking lot). Associating with 3-4 Greater Yellowlegs (GRYE) and 1 Lesser Yellowlegs. Morphologically very similar to the former, with the main difference being shorter tarsometatarsi. Its bill appeared slightly longer and more recurved. Plumage and soft part differences were more significant. Appeared to be in nearly full alternate plumage, noticeably paler overall than GRYE. Underpart markings varied from GRYE in being less dense on the breast and not extending as far down the flanks (sparse streaks on breast, transitioning to chevrons and spots on upper flanks, contra barring on GRYE). Upperparts were marked by extensively black-centered scapulars, which contrasted with grayer, more monochrome coverts. When preening and flying short distances, the bird’s whiter tail and wedge of white feathers extending up the back were very prominent. Even with its wings folded, the upper back was notably pale compared to GRYE. Lighting was poor, with overcast sky and light rain, but leg color was strikingly different than that of GRYE - putty-colored with subtle greenish and pinkish highlights depending on viewing angle and proximity.