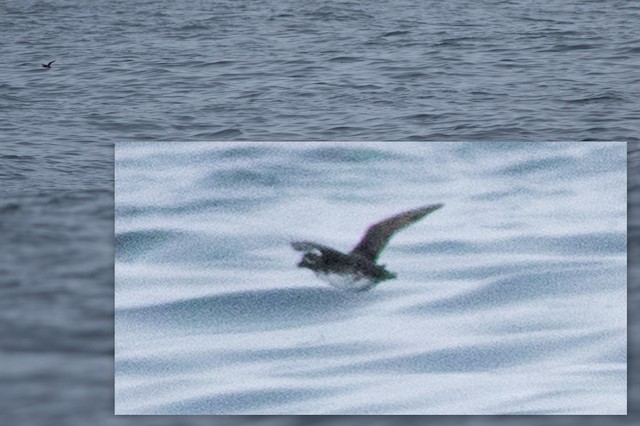 During the drive to the canyon, numerous alcids were photographed that flushed in front of the ship along the way. Most of them consisted of Rhinoceros as well as Cassin's Auklet (and a handful of Marbleds). One group that flushed stuck out as being heavier compared to other cassin's just seen. The flock flew off immediately in a fast flight away from the ship. Only Blair managed to see this flock, and it took until home to verify the pictures as being Parakeets. Note the white line behind the eye in some crops, as well as very bright white belly, not the elongated headshape of a Rhinoceros auklet and - most importantly - completely dark underwing, missing the gray bar of a Cassin's. A second bird - which is documented better - was photographed the same way, but was only found on the hundreds of pictures later. The white eyestripe is also in this bird clearly visible. Due to the shy nature of these birds as the fact they were mostly encountered during the drive at full speed, unfortunately hardly any of the attending fellow observers were able to connect with them. It is now obvious though, that in this time of the year, the species is very much present in BC waters, albeit creating a true challenge to get good views, especially without a camera.