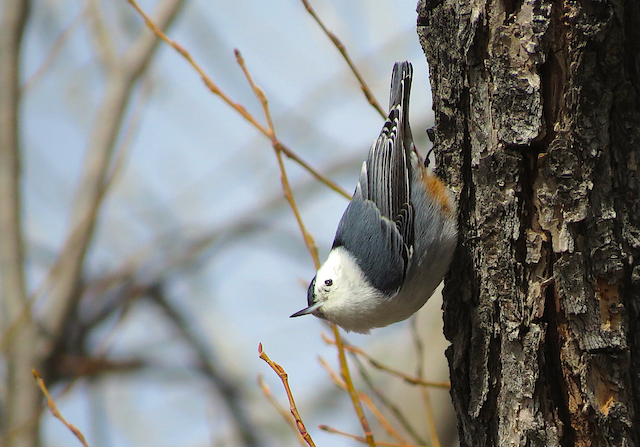 I would guess -nelsoni- on this, just based on range and probability; however, I don't know for sure. Anyhow, an altogether enchanting bird, charming and winsome.

Along Boulder Creek near the sewerage inflow. It was a glorious sight, walking up and down the rugose boughs of an ancient and stately creekside willow, doing the random walk thing, every which way. Although it never gave a full-on call note, the bird frequently gave those little "pip" sounds, endearingly squeaky. The nuthatch just walked around erratically, doing its thing, neither interested in coming in close to see us, nor particularly scared off. After several minutes of gobsmacked amazement, we reluctantly moved along. Chip Clouse was in the bathroom the whole time we saw this bird. It would have been a year bird for him. I feel terrible for Chip (we call him "Chip the dip"), but I'm also so delighted that the rest of us in the group got to enjoy this most marvelous of avian apparitions.