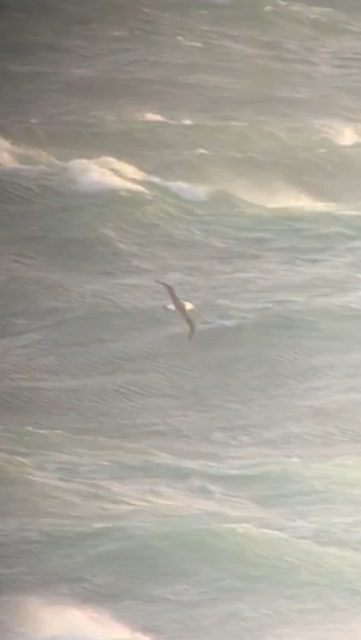 Incredible moment! Arriving to seawatch at 15.45 we had done just under an hour before I picked up the bird in question. I scanned east, looking over to Bass Point and at around 16.40/41, I noted a large bird cruising just above the waters surface heading west, quite close in shore. It was clearly big, bigger than fulmars and kittiwakes. At first immature Northern Gannet sprung to mind (the combination of white head and dark upper wings, seemed fitting for a 1st winter Gannet). Something wasn’t quite right though. I stayed on the bird and by now was increasingly concerned as I couldn’t figure out what it was, as it was still hugging the surface! After about a 30 seconds or so of watching, I expressed my concerns about the bird to my friend Matt “get on this bird!”. Upon doing so the bird in question banked up and the sheer size of the bird was established. At first I noticed the long, relatively narrow wings, undersides being white with a thick black leading edge and thinner black trailing edge. The body was very large and when it banked up a second time I got a glimpse of the large orange/pink coloured bill. I knew instantly what it was. The bird was on the same line, close in, just inside the tip rock. Increasing stress now as Matt hadn’t seen it. I shouted, “ITS AN ADULT ALBATROSS!”. Shaking for the adrenaline I was unable to describe its position (still a considerable way to the east) to Matt. In the end I shouted to him to look in the scope as the Albatross was now showing more readily, occasionally disappearing in deep troughs but not for long. By 16.44/45ish we had both seen it and well enough that we were 100% sure we were looking at an adult BLACK-BROWED ALBATROSS! The dark black upper wings, black tail, large orange/pink coloured bill, black “brow”, and distinct underwing pattern and it’s large size, put ID beyond doubt. Now we could enjoy the moment! Shaking, I attempted to get some record shots/video of the bird. The bird was now up to the left hand rocks and both us unable to comprehend what we were witnessing. Both of us were shouting furiously, “is this actually happening” and “Oh my god this is unbelievable!” Despite the wind and very shaky hands, I managed to fire off a few pics and a bit of video. At about this point, the bird had drifted out a little and was passing just out from the top rock. Shill shaking with all the excitement we enjoyed great views as it passed west over the reef and into the setting sun, where we lost it to view at around 16.48 as it dipped into a deep trough and strong sunlight! 6 mins of watching plus a minute or so of intense panic on the original pick up. An unforgettable experience of a truly mega bird. The adult BLACK-BROWED ALBATROSS passed west off Lizard Point between 16.42-16.48 on 8th February 2019.