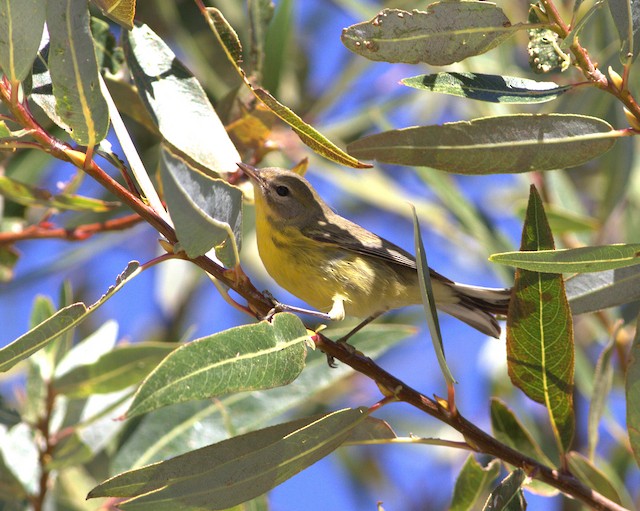 My understanding is that this bird was found earlier in the day by Matt Victoria and later confirmed by Nick Lethaby. Upon our arrival this afternoon, we searched for nearly an hour before Dick spotted this bird foraging along the western edge of the willows adjacent to a large, dirt parking lot near the campground entrance. We then followed the warbler to the northwest along the willows until it crossed the entrance road and continued up the slope to the west where we lost it. Much like the bird we saw earlier in the day on the Oxnard Plain, this bird foraged actively but quietly. Given that I studied the Ventura bird carefully, I spent most of my time trying to get photographs of this bird, so my views were generally not quite as good. This was a medium-sized warbler with an unremarkable shape apart from a longer-than average tail that was pumped up-and-down at least on occasion. I noted that the bill was short, slim, and sharp-tipped, but I really did not notice the finer details of this bird's shape, and even if I had, I probably would have confused them with the bird that we studied more carefully in the morning on the Oxnard Plain. I did manage to study this bird closely enough to confirm both that it was indeed a Prairie Warbler and that it was very similar in appearance to the bird we saw earlier in the day. This bird had a subtle face pattern that combined a diffuse, whitish supercilium that arched over the eye with a complementary crescent under the eye that was similar in both character and coloration. I also noted a darker line through the eye and at least some indication of the dark moustachial-stripe, but I failed to notice the finer details of the face pattern. Like the bird we saw in the morning, this bird had yellowish-olive upperparts with two relatively indistinct and somewhat diffuse wingbars that were a paler shade of olive-buff, but again, I failed to notice the finer details of the patterns on both the coverts and remiges. This bird was the same, deep-yellow color as the bird seen on the Oxnard Plain, but I did not notice the paler chin, and the streaking on its sides and flanks seemed to be even duller and less conspicuous (though there was certainly at least some blurry streaking at the sides of the breast). Like the Oxnard bird, this bird had a paler shade of yellow on the undertail coverts, and it had whitish tail-spots that seemed to be encircled by dark basally, distally, and along the outer edges; however, I thought the whitish region on the underside of the tail was somewhat less extensive on this bird. The bill was at least mostly dark, but I again thought the lower mandible had some pale coloration basally. The eyes were dark and the legs seemingly blackish.