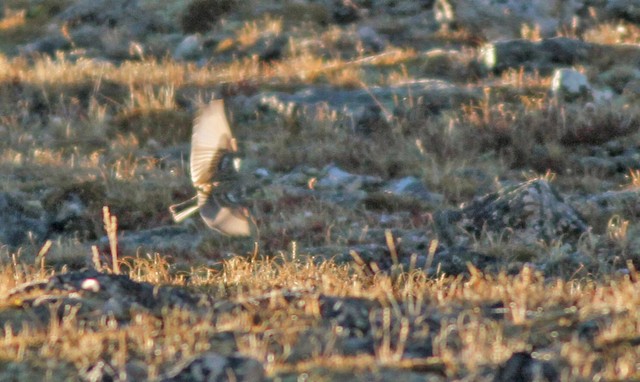 Very rare: first detected by rattle call as it flew up from below path (apparently) heading up towards peak above Medicine Bow; call fairly reminiscent of LALO but to my ear was slightly more liquid; I immediately recognized as Longspur due to its relative similarity to LALO in vocalization; no other calls given and only heard twice; can CCLO make a similar call?; I watched the bird fly up by me in my binoculars; struck me immediately as a medium sized sparrow like bird; undulating flight; as it flew past I had my first good look at the tail which should an obvious white outer edge and a dark central tail; the white, while obvious, was not extensive throughout tail; the one useable image seemed to confirm that white was restricted to the two outer tail feathers but a difficult field mark to confirm; I could see obvious wing bars with a particularly obvious upper white wing bar (lesser coverts) but this was more obvious in the one usable photo I obtained; I'm not entirely sure this feature can't be seen in CCLO?; the bird had an overall buffy and warmly colored appearance, especially below; the chest had some fine streaking which appeared to sparsely (at least) cross the breast; I have no prior field experience with SMLO; ID largely helped by single photo but field impression and audio support the photo; additional opinions very much appreciated from those with more experience; details from field notes will be added to this and submitted to records committee; 'photo' added soon; the bird did not seem to be lingering and I visited the spot twice after this with no luck; it was in view for about 3 minutes; landed briefly twice but only for a short time and always out of view in grasses; last seen flying high over highest point above Medicine Bow trail headed east;