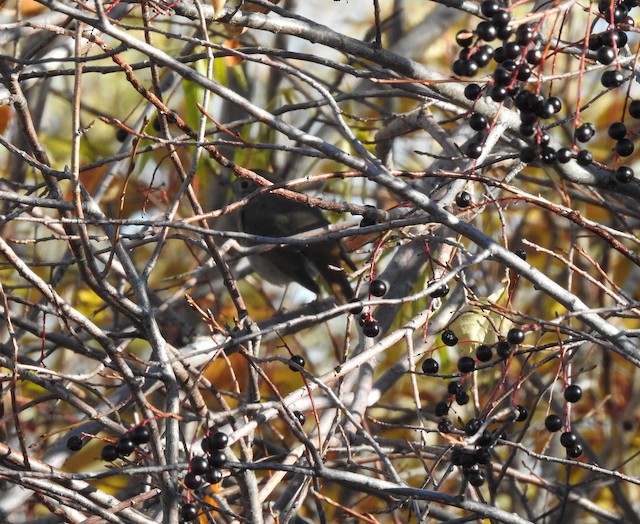 Ca 1357, in the vicinity of Alnus incana and a mostly leafless but fruit-rich Prunus virginiana thicket along the stream, I saw ca 10 AMRO, vocalizing a lot. Saw several eat P. virginiana fruits whole. Also saw at least 2 CEDW eating P. virginiana fruits; also 1 seen sallying. Then a Catharus thrush seen backlit in the understory, which I later confirmed was a HETH. It was ca CEDW size, with gray back and pale underside with distinct dark spots. Followed in binoculars for ca 5-10 seconds, moving around among fallen P. virginiana leaves in the understory. Though the tail had a reddish gleam at one point, but lighting was bad and I thought I might have imagined it. Definitely not VEER due to spots; and I thought it was most likely HETH due to season. Waited until 1442, and got one more brief glimpse that was likely the HETH (heard emphatic "chup" calls); otherwise no further sightings. AMRO continued to feed. On the return at 1622, still saw a minimum of ca 20 AMRO perched between the raised hill and the cross-fence, feeding on chokecherry fruits. Heard 1 singing. Still heard occasional CEDW calls in the vicinity too. Then at 1626, I spotted the HETH again, in the same chokecherry thicket as before, but now using a few perched about 2-2.5 m high at the E edge of this thicket, still with ca 15+ AMRO in the vicinity. Clearly saw reddish tail in now much-better light. Nonvocal while I saw it; got photos.