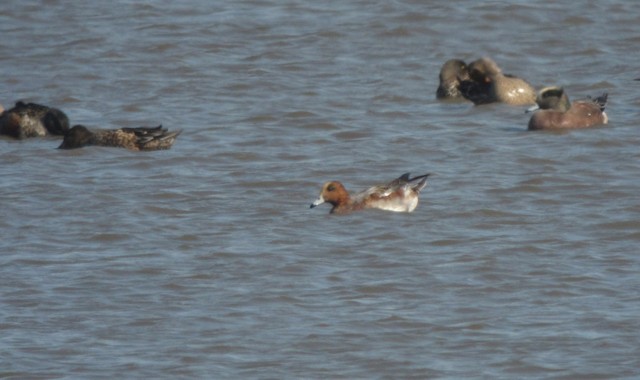 I found this bird right at the end of my time for the day. When I first saw it in the distance, it was swimming with 3 American Wigeon, at a funny angle so I could see the peach crown stripe and rufous head, and also brown sides, so initially I thought it might be an American x Eurasian hybrid. But, after getting a better angle and seeing the head better, with no green (though a tiny green spot around the eye shows up in some pictures, this shows up in many pictures of pure-looking Eurasians taken in the Old World) at all on the head, extensively gray back and gray and brown flanks, it was clear that it was a good Eurasian, molting out of eclipse plumage. We spent a couple of hours photographing the bird. I had to leave before anyone else arrived, but Kenny and Ladonna got there that afternoon and saw the bird as well. Several others saw it over the next couple of days. Several photos start at the following address: http://www.pbase.com/mctodd/image/138937342