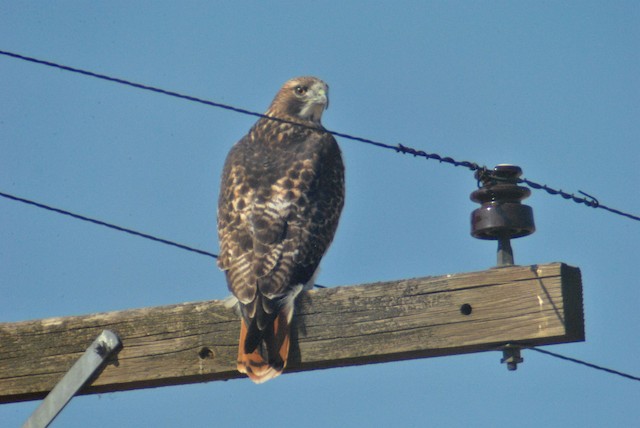 Another, clearing shot showing the white throat, pale supercillium and tail with only one terminal band.

According to ebird, the first state record for this subspecies. Here's the story in great detail. We were driving down North Touchet Road and observing the hawks on the way and we pulled over to look and photograph another Red-tail on a pole. As soon as I laid eyes on him, I knew it wasn't a normal Western (calurus) Red-tailed Hawk. For one he had a white throat, which I have only seen in immature Westerns. This one was clearly an adult. After ten more minutes of observing the hawk (and tracking him down two poles), we noticed some other neat features such as the streaking on the sides of the breast and the dark belly band. Tail also had only one visible terminal bond, another feature against the Western group. Underwings had rufous wash. Finally, we decided to elevate what it was since I knew this wasn't a normal Western and we left the hawk alone. Notes will be added next to each photo pointing out the features against Western and for Eastern. Update: 10/22/2018 Sent photos to raptor experts and I had several of them say that this bird is most likely a Western X Eastern Red-tailed Hawk intergrade, which apparently infrequently breed in the British Columbian Rockies with several migrants going through Western US every year. And I was told by another expert and ebirder that if I were to add this bird to ebird, add it as the subspecies that is rarer and make sure ebird is aware of the situation so the intergrade may be added to ebird in the 2019 Taxonomy Update. Update #2: 10/22/2018 Furthur conversation and a confirmation from a Hawkwatcher, that this hawk cannot be attached to a subspecies due to date and location. Though the evidence leans to a rare intergrade between Western and Eastern, there is no evidence to disprove that this is a normal white-throated calurus, which are often seen in the southwest.