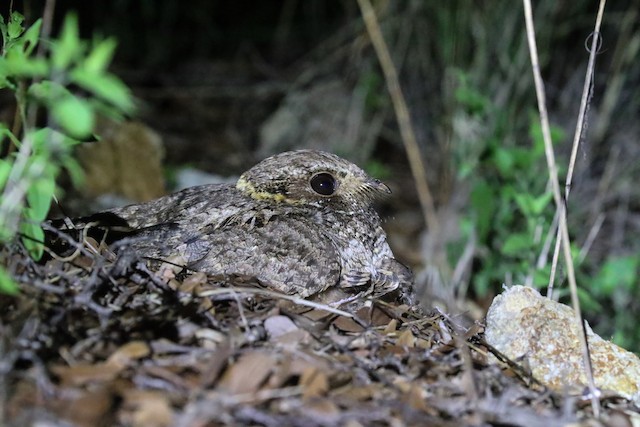 Warm buffy tips to outer tail feathers prominent and identifying this individual as a female. Male seen earlier in the night with distinct white tail corners. Also note nestling’s wingtips sticking out from beneath the mother’s breast feathers.

The male Buff-collared Nightjar was seen catching insects in the open camping area just south of the confluence of Cal. Gulch and Warsaw Canyon around 7:22pm. This camping area is just south along the road from the confluence and has a fire pit at its southern end. The camping area is fairly flat and open with scattered tall mesquites. The bird gave soft call notes as it captured insects around the cow patties. Call notes were similar to the opening phrases of the species’ song song but were much softer; “prrick prrick, prrick”. Fairly large, and long tailed. Much longer winged and longer tailed than Common Poorwill that was also seen in camping area. Large bodied and less compact overall. Golden-buff collar prominent with the help of the spotlight. No playback was used. Photos obtained. Best bet is to position yourself at the west end of this camping area and sit quietly with the sun at your backs as it sets below the horizon. More info on nest and photos to come.