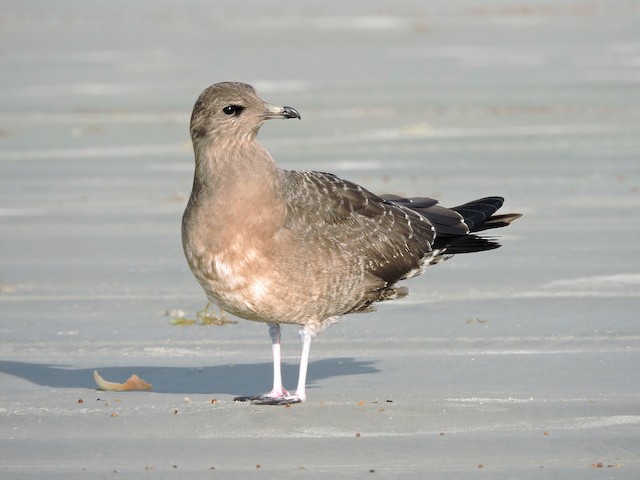 We went to Jetty Park this morning looking for a parasitic jaeger that was reported yesterday. We were thrilled when we saw a jaeger fly by the jetty, then fly down to the beach and land there. We have never seen any jaeger species before, so it's a life bird no matter what! Unfortunately, we did not get a photo of the flyby. Ran down to the beach to obtain photos of the bird. Bird was about the size of a laughing gull, but stood alone with no other birds around it. After analyzing our photos, reading, and looking at other eBird photos of immature/juvenile jaegers, we believe this is an intermediate juvenile long-tailed jaeger. Reasons we believe that are 1) the nail on the bill comes back almost half-way, which looks more like LTJA than PAJA. 2) The overall color was a more grayish-brown look than cinnamon or buff, and the barring on the feathers looks whitish, not cinnamon colored. 3) The nape of the neck didn't really appear much lighter in color than the head. Overall the plumage coloration appears more uniform (as with LTJA) than striped (as with PAJA). 4) This bird seems to have a pale upper belly (as depicted on intermediate juvenile LTJA in Sibley). We don't know if this is the same bird as seen yesterday by others or a different one. (**Update - we saw photos of the bird from the day before and this is not the same one. Thanks Jim E. and Phyllis!)