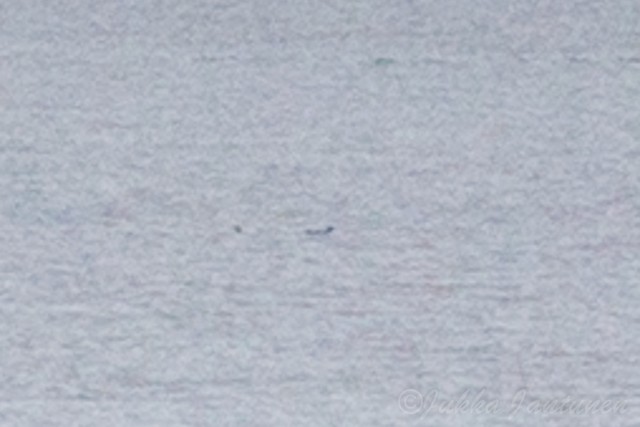 At 9:20 I noticed two tiny specks next to a Red-necked Grebe. Upon closer inspection with my scope they turned out to be breeding-plumaged adult Ancient Murrelets. I watched them for the next 20 minutes, mostly with 60x magnification, as they swam, dove, wing-flapped and preened, and slowly moved northwards. I also took many photos even though the birds were about 2km away. After that 20 minutes I went to check my nets and after returning was unable to relocate the murrelets again. Two much smaller birds than Red-necked Grebe not too dissimilar to a phalarope but of course stockier, different shape and behaviour. Overall grey-black-white with black head, grey back and white flanks/breast. With scope most of the key details were visible although due to the distance some of the finer details were not. The whole back was pale medium grey. The head and upper breast/throat/bib were black with a indistinct (due to distance?) white stripe higher up behind the eye (which I of course didn't actually see) and a prominent white area on the side of the neck between the head and the back/body. The bill was pale but surprisingly difficult to see. Often they appeared bill-less. When preening they exposed their belly which was pure white all the way to undertail coverts. When flapping their wings it was possible to see white underwing coverts and an indistinct band of dark on the flanks between the belly and the underwing. They dove in typical alcid fashion with their wings open. The photos below show 1) the best image showing the grey back and black head, and perhaps even suggestion of the pale stripe high in the rear head 2) bird vertically on the surface, partially facing towards the camera, wing flapping, white belly and underwing visible. This was right after a short flight dash towards me.