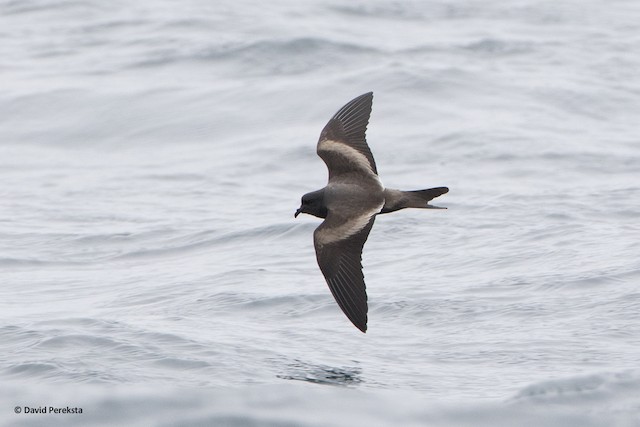 At approximately 12:37 as we were sneaking up on the big storm-petrel flock, a large storm-petrel quartered in towards the bow from the right. It was called out that “a close storm-petrel” was in front of the boat so those on the bow could get photos and identify it. The consensus of some in the bow was a dark-rumped Leach's, but they were troubled by some of the field marks. A dark-rumped chapmani Leach’s was trailing the bird in question so that may have caused some confusion. Those birds passed the bow quickly. The bird was gone so fast as storm-petrels do and we were approaching the large flock so we were on to the next thing. Upon reviewing photos the following day, David Pereksta was alarmed when he saw the details of this bird and suspected it could be a Tristram's Storm-Petrel. A robust-looking sooty-colored storm-petrel with pale back and rump, deeply forked tail, bright carpal bars, and contrastingly dark head. In addition, other photos show it apparently gliding on slightly bowed wings. The underside was uniformly dark including the underwings. The carpal bars were very pale at the base along the inner trailing edge of the wings, indicating a fresh juvenile. The primary shafts appeared bare, but this species has dark shafts that can reflect silvery under certain lighting conditions. Joel Barrett’s photos with the Leach’s in the same frame show a shocking size difference with the bird in question being much larger and more robust. The overwhelming consensus of seabird experts consulted is that the bird is a Tristram's Storm-Petrel. This bird was seen 19 nautical miles NNW from San Nicolas island (GPS coordinates: 33,35,20.88000, 119,38,51.79200).