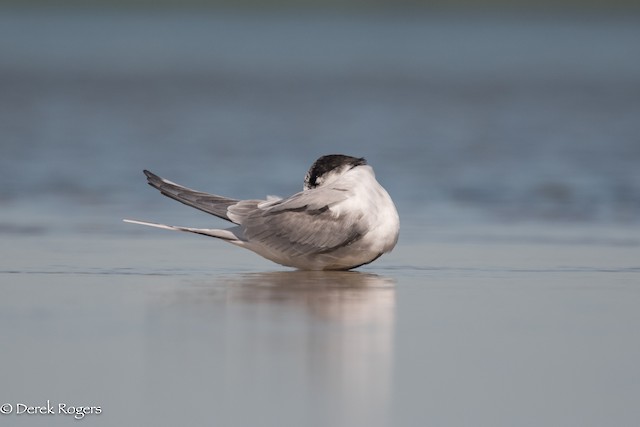 At least two, 1st summer individuals loafing on flats with mixed sterna flock. Multiple sightings throughout the observation period with 1,2,1 & 2. My initial observation of one individual eventually turned into two birds, both of which flew off to the east along Bellport Bay and completely out of sight. Shortly thereafter, another bird flew in from the west. This cycle of birds disappearing and others arriving continued but close scrutiny of my photos only definitively nails down two birds therefore I’m confident that at least one, or both, of the birds that disappeared to the east eventually (and rather quickly) returned. Critical field marks were gathered during the observation period; rounded, more delicate and elegant appearance than COTE. Long-winged with longish tail streamers, although birds were young and streamers not as developed as one would see in and adult. Outer tail veins with dark gray outer edges. Bill all dark and shorter, less narrow and pointed than COTE. For the most part, head shape was consistently more rounded as well but this varied depending on posture. Both birds had extensive dark smudging surrounding their eyes but with varying amounts of dark flecking on foreheads. This smudging extended further past the front the eyes as compared to similar aged Common Terns, whose dark eye patches were limited in extent. The folded primaries showed a uniform gray tone throughout and were quite long. Leg length varied among individuals but always shorter than Common Tern. Leg color dark but with an underlying deep red tone. One of the photographed terns had more reddish tinged legs and the other with darker legs. In flight; uniform gray upper wings (no dark edging on upper primaries as seen in COTE). Underwing showing classic ARTE pattern with thin dark trailing edge of primaries (dark restricted to the tips of the primary feathers, not as extensive as COTE exhibits).