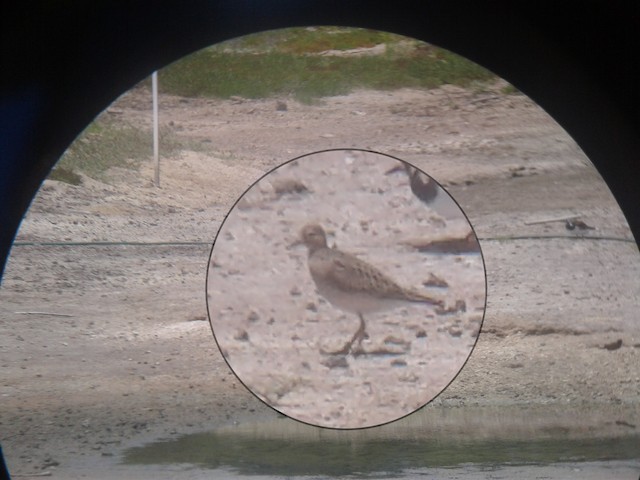 Apparent ninth record for the state! The bird was first seen with a few turnstones in some exposed mangrove roots out on the mud/reef flats. The yellow leg color caught my eye, as asides from the Wandering Tattler, not many other regularly occurring migratory shorebirds have yellow legs (in Hawaii). It was mostly obscured by the roots, but I was still able to get views of it. After a while of preening and bathing, the flock flew from the roots, and onto the wetland area (I have never sprinted so hard to keep up with them in my life) for a few minutes. The whole flock eventually flew east, towards the airport. My thoughts initially went to a Least Sandpiper, but the size of the bird was not right, and the plumage showed no signs of streaking. Given the plain plumage, I submitted this as a Ruff, but this was corrected to a BBSA after some excellent ID discussion online. Medium-to-small sized shorebird (slightly smaller than a turnstone). My photos are not good, but in the magnified image, the breast of the bird does not appear to be streaked, nor does it appear to have any markings. Overall it is a tan/buffy color, with scaly feather patterning on the back, alongside a white unmarked belly stained with an overall plain brownish wash. As Sharif Uddin pointed out to me, the head appears to feature no eyeline/supercilium and the face seems unmarked with a large black "buggy" eye. A special thanks to Eric Vanderwerf, Sharif Uddin, Joshua Rudolph, Kurt Pohlman, and Lance Tanino for ID help! :)