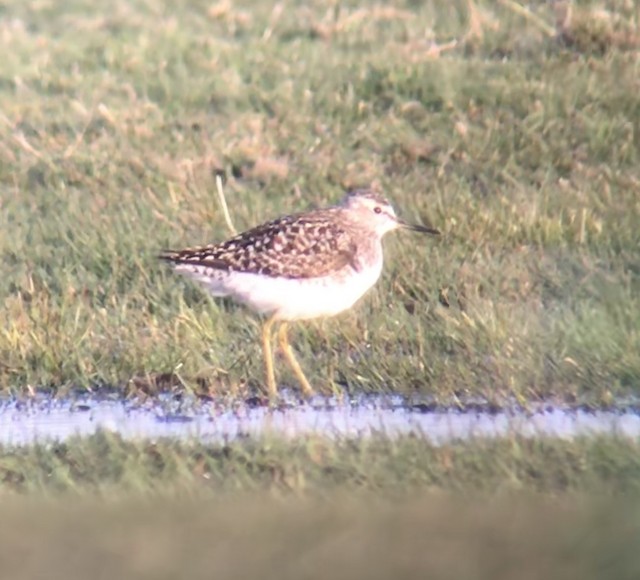 ***mega rarity found by Patricia Lindsay (first county record). Shai, Brent and I came to this location from Moses in hopes of seeing her perplexing shorebird, as well as a nice grouping of shorebirds foraging in rain-puddles formed at this location. Hoping to re-find the then missing bird, Brent and I went golfing, and ultimately came across the bird sitting in a puddle. After much cursing, Pat and Shai managed to join us where we were able to view the bird well, in strong late evening light. The bird was strikingly different from other Tringa sp., most importantly Lesser Yellowlegs and Solitary Sandpiper: Structurally it showed a shorter, straight bill, with short tail and wing projection, giving it a very compact appearance. The upperparts were well patterned, with coarser/larger spots than seen in LEYE/SOSA, while the underparts were plain with only the faintest barring along the flanks and undertail. The legs were longish (though more of a pale yellow) as in other Tringa sp. but the bird's posture made them appear somewhat shorter: it was very squat, and often teetering/bobbing its tail, recalling SOSA or SPSA, and rarely standing as upright as LEYE. Perhaps most importantly the bird showed a very noticeable pale supercillium which contrasted with vaguely dark eye-line and lores, and cap, lacking any substantial eye-ring. Luckily the bird flew from the inaccessible puddle, calling (a high pitched, "peep peep peep" or "chip chip chip," almost.. i don't know... crossbill like? sort of with that quality? just imagine it), and landed very close to the road where views could be enjoyed by many!