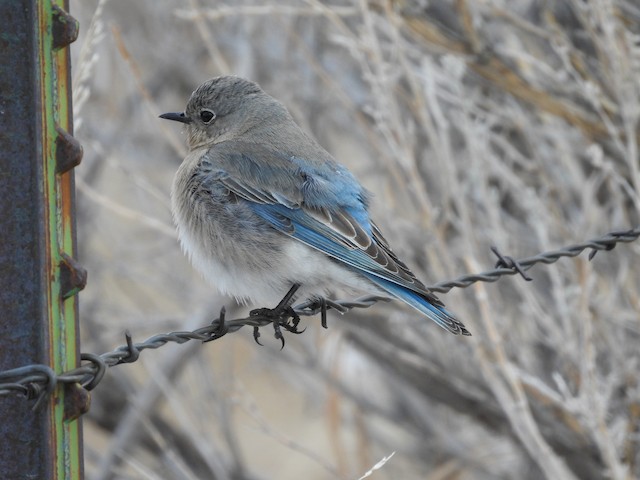 Numerous sightings during the survey, including lots of foraging activity. At 0934, 1 flew over the field S of reach 4, calling, heading NE. Ca 0935, I saw a male perch in a snag shortly E of reach 4, calling, then fly upstream. Around 1055, I saw 3 males perched on the fence or on isolated (surrounded by grass) shrubs near of just beyond the E part of reach 4. Around 1007 when the NSHR reappeared near the E part of reach 4 there were 3 males and 1 female MOBL perched on the wire fence ca 60 m away from the mostly dead shrub where the shrike perched. The bluebirds did not flush or show behavior that suggested alarm to me, and when the shrike flew back upstream 2 of the male bluebirds flew that way too. Later, near the photo point, I saw at least 1 male perching near the S-facing slope N of the stream, where the snow was already more or less gone again. At 1137, a minimum of 15 MOBL flew in as a group from upstream - without calls - and landed on the ground or nearby Chokecherries on this same S-facing slope. At least 2 females. Seen in this area until ca 1145. Around 1154 I saw at least 11 (8 males, 3 females) apparently foraging and perching on the ground on a south-facing slope with patchy snow N of the the single Betula occidentalis along the stream in reach 3. At 1234 the wind increased momentarily to gentle breeze from E or SE and I saw at least 6 bluebirds perching on grasses and hovering over the gently S-sloping, mostly snow-covered (patchily) grassland NE of the diversion. Around 1247 I saw at least 7 bluebirds foraging on patchy bare ground on the gentle S-facing slope N of the creek about 200 m upstream of the diversion, farther upstream than where seen a few minutes ago. Around 1430, at least 8 bluebirds foraged in the vicinity of Artemisia cana near the cross-fence, including 2 females. At ca 1435 the bluebirds all took off, at which point I counted 22, and they flew SE. Ca 20 seconds later a small falcon flew past my left shoulder (from the N or NW) at ca 2x shrub height in pursuit, and continued out of sight towards a residence S of reach 3. Ca 30 seconds after it passed, the bluebirds (some or all?) had returned. At least 3 perched briefly in a Chokecherry before apparently resuming foraging. Near the end of the survey, at least 3 were foraging in the field S of reach 4. One of the off-leash dogs that had recently come on-site ran towards 1 or 2 of the bluebirds, which flushed.