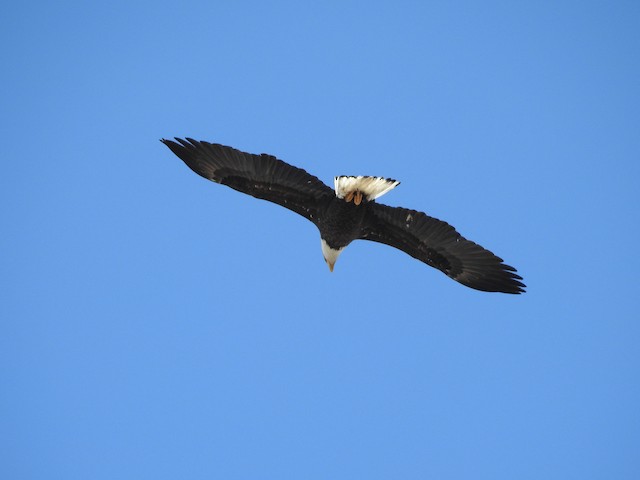 Apparent adult (or subadult?) seen at the beginning of the survey perched on a power pole NE of the Head Ln Bridge, N of the creek. Actually first noted here before survey start while driving in at 0906. Looked numerous times while I was within sight of it and it remained on the same pole, with no apparent movement or activity; still present when I was last within sight of it at 1104. At 1400, while near the raised hill, I saw an immature BAEA SE of me, relatively high. It approached, I thought mostly gliding (on flat wings), and passed over, then circled several times NW (upstream) of me before continuing upstream, now flapping steadily. Apparently not able to get lift? Stopped watching it at 1403 when it was distant but not yet speck-like in my binoculars. Weather at the time was weak/intermittent sun, light to gentle E breeze, 85% stratus clouds, and cool (probably in the high 30s F). At 1550, I saw a subadult BAEA and a RTHA circling over the Head Lane area, neither flapping. Over the next few minutes they drifted gradually W, still circling, reaching the W part of reach 4. By 1556 they were still circling over reach 3 or reach 4 but were much higher; there was full sun. I was not able, through comparison of photos, to definitively conclude that the putative adult seen early in the survey was a different individual from the subadult seen at the end, though of course it might have been.