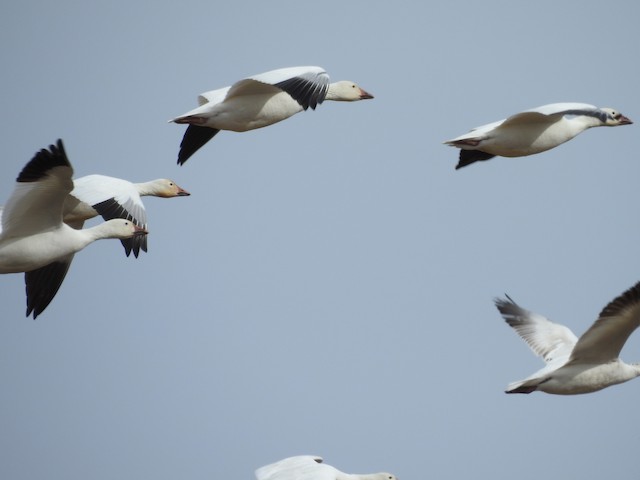 Amazing! Estimate by 50s. Counted 5000 by 50s in the field/pasture E of the WMA near the count beginning. At least 4 blue-morphs seen - did not examine all of them closely but assumed that all 4 were SNGO. I watched for quite a while (an hour? longer?) from one position and the foraging geese gradually got closer, with small proportions in the air at one time, "hopscotching" from farther portions of the field to the nearer edge of the flock. Several times I saw numbers fly between the field and the open water near the boat launch at the WMA, following a similar pattern of smallish groups in the air at one time rather than an en masse movement. Several other people stopped and joined me for briefer periods while the geese were nearby. We shared a hushed awe and wonder for the spectacle of so many wild birds so close, and the awe-inspiring movements of the flock. By 1734, all of the SNGO had moved to a distant field NE of me on the other side of Lincoln Rd. At 1740, I saw about 750 (by 50s) more SNGO approach from the NW in flight, heading E. They apparently landed with the others in the distant field. At 1806, some numbers of SNGO flew S from the distant field, across the lake. By 1810 or 1815, there were substantial numbers of SNGO on Lake Helena again. By the count end all of the SNGO in sight were either on the water or flying to the west, with none still visible in the field to the NE. Numbers visible were definitely fewer than seen earlier.