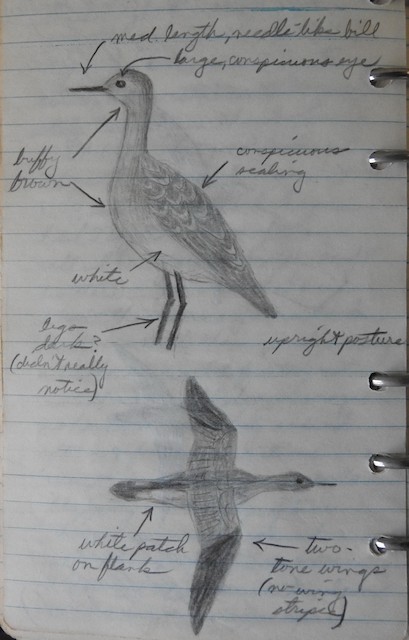 Seen on ground and in flight at distances of 75-100 feet on North Peak at 4:30 p.m.. Stood upright like a yellowlegs and occasionally nervously jerked its head back and forth like a yellowlegs. In flight, it had shallow wingbeats and soared a lot between flappings. Color: brown, dark above with light brown feather edges, especially on wing coverts and scapulars. Lighter brown on breast and neck, white on flanks. Head and neck uniformly medium-light brown. Eyes large and dark and stood out prominently against uniform medium-brown head. In flight it showed a distinctive whitish patch on sides of uppertail coverts (but not as bold as in many Ruffs), and uniformly dark brown wings with primaries a little darker than rest of wing. No hint of any wing stripes. Tail was noticeably long for a shorebird. Bill medium short and needle-like; neck thin and long; legs medium long. Ran robin-like with long pauses between, always remaining upright as if very alert. It flew 3 times for short distances before flying over the hill and out of sight after about 5 minutes. I never heard it call. The bird was seen about 10 minutes later (4:45 p.m.) by Breck Tyler. [Bird is illustrated in my field notebook.]