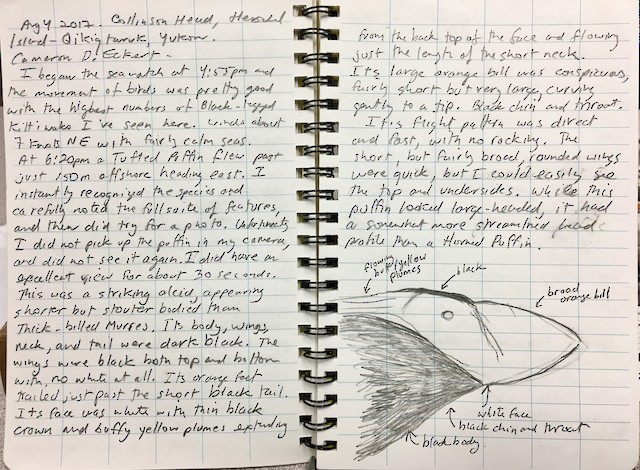 Stunning!! Adult Tufted Puffin flew east past Collinson Head at 6:20pm. Winds about 7 knots NE, and sea state relatively calm with small waves, and not white caps. I have seen 10 Horned Puffins from Collinson Head since 2013, and this is the first Tufted Puffin I've seen. An incredibly striking bird. Here's what I recorded in my field notes: "August 4, 2017. Collinson Head, Herschel Island-Qikiqtaruk, Yukon. Cameron D. Eckert. I began the sea-watch at 4:55pm and the movement of birds was pretty good with the highest numbers of Black-legged Kittiwakes I've seen here. Winds about 7 knots NE with fairly calm seas. At 6:20pm a Tufted Puffin flew past just 150m offshore heading east. I instantly recognized the species and carefully noted the full suite of features and then did try for a photo. Unfortunately, I did not pick up the puffin in my camera, and did not see it again. I did have an excellent view for about 30 seconds. This was a striking alcid, appearly shorter but stouter bodied than Thick-billed Murre. Its body, wings, neck, and tail were dark black. The wings were black both top and bottom with no white at all. Its orange feet trailed just past the short black tail. Its face was white with thin black crown and buffy-yellow plumes extending from the back top of the face and flowing just the length of the short neck. Its large orange bill was conspicuous, fairly short but very large, curving gently to a tip. Black chin and throat. Its flight pattern was direct and fast with no rocking. The short, but fairly broad, rounded wings were quick, but I could easily see the top and undersides. While this puffin looked large-headed, it had a somewhat more streamlined head profile than a Horned Puffin." I have seen many hundreds of both Horned and Tufted puffins. I had an excellent view, noted all the features, and the identification was straightforward. This species is very rare in the Beaufort Sea, although was fairly common off Point Barrow in 2016. It's notably that there are records for Greenland, Maine, and Kent, UK. Its plausible that these far-flung vagrants might transit through the Beaufort Sea on route to these distant locations in the east.