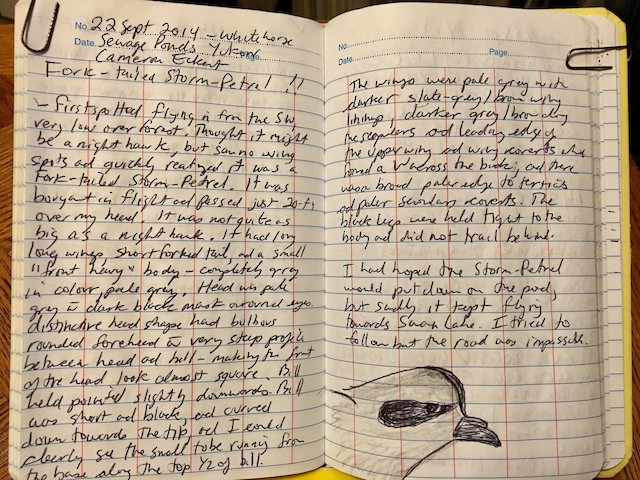 I was birding the west side of the Long Term Storage Pond and first spotted this bird flying in from the southwest, very low over the forest; and from a distance thought it would be a nighthawk as it looked long winged and graceful in flight. I got the bird in my binoculars and quickly scanned down the wing looking for the wing spots of a nighthawk, which I didn't see, and as I reached the body the full realization of what I was seeing hit me -- it was a Fork-tailed Storm-Petrel !! It had a light, buoyant flight as it flew directly towards me, and within seconds passed just 6 metres overhead and just slightly to the north of me, and I had a perfect view from the tip of its bill to the tail. In general size, it was not quite as big as a nighthawk. It had long wings, a short forked tail, and a relatively small "front heavy" body which was completely pale grey in colour; the head was pale grey with a dark black mask around the eyes; head shape was very distinctive with a bulbous rounded forehead and a very steep profile between forehead and bill -- making the front of the head look almost square. The bill was held pointed slightly downwards. The bill was short and black, and curved down towards the tip, and I could clearly see the small tube running along the top half of the bill. The wings were pale grey with darker slate-grey/brown wing linings, and a darker grey/brown along the scapulars and leading edge of the wing and wing coverts which formed a W across the back; and there was a broad paler edge to the tertials and paler secondary coverts. The black legs were held tight to the body and did not trail behind. I had my camera in the backpack, but opted to get a full detailed view of the bird before trying for a photo. It continued flying out over the sewage pond and I hoped it would drop down to check out the feeding prospects and allow for some photos. Unfortunately, it looked down at the pond but kept on flying, eventually out over the forest towards Swan Lake. The road to Swan Lake was not passable, and so I could not search there. I texted local birders, but it was clear the bird was gone.