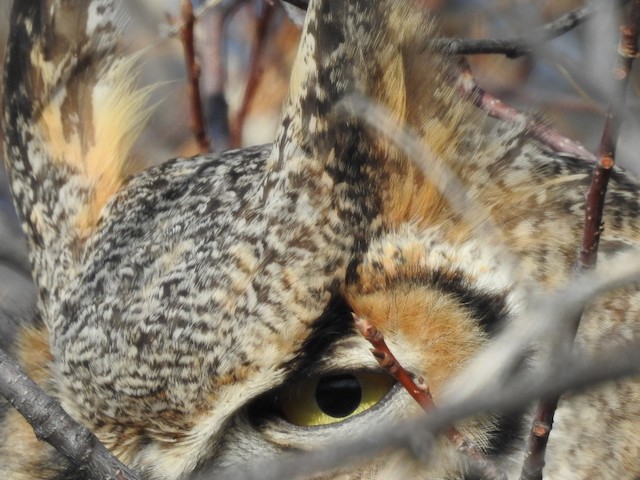 1 individual perched in a row of Prunus virginiana on a steep bank about 20 m N of the stream between the rocky draw and the raised hill. First seen as I approached past some other shrubs which hid it from view, when I was about 20 m away. I stopped immediately and the owl continued to have its eyes half-closed, blinking occasionally, and not seeming disturbed. I got photos and then backed off and went around. I noticed it was very quiet in the vicinity as far as birds went, though it was not conspicuously so given that I heard sparse bird activity all day. From the south side, this owl was surprisingly obvious, quite visible for about 180 degrees. As I continued upstream, I noted a SECOND GHOW roosting in an alder close to the stream above the cross-fence. I strongly suspected it was not the same one, and confirmed that when I returned back downstream and found the first owl in exactly the same spot as before. I skirted around the second owl, and it too seemed un-alarmed by my movements. A comparison of photos tentatively seems to support my impression in the field that the downstream bird had a more orangey facial disk. Photos of the upstream bird seem to show some faint, concentric dark patterning within the facial disk. Measurement on the MTNHP MapViewer shows that straight-line distance between the two birds was about 325 m. Might they be a breeding pair? It will be interesting to see if they remain around.