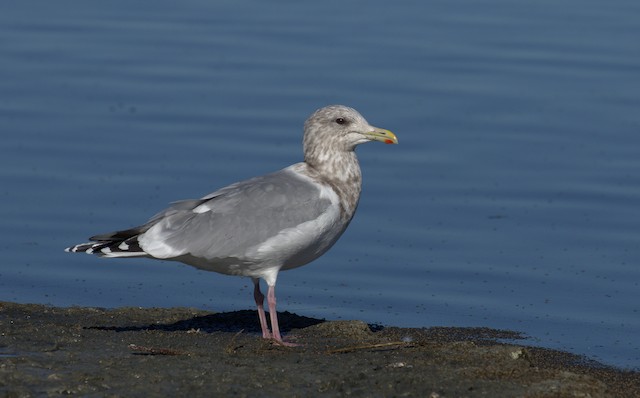 I spotted this bird standing on the beach along the shore of the lagoon while checking the gulls, where it remained for much of our visit before flying out into the lagoon and landing on the water. This was a medium-sized gull that appeared to be a little smaller than a nearby Herring Gull, albeit relatively similar in shape. The bill was at the small end for a Herring-type Gull and it had a mostly straight culmen, a rounded tip, and little obvious angle at the gonys. The forehead was more steeply sloping than that of the Herring Gull and the crown in general was smoothly rounded. Typical of a large Larus, the head was of unremarkable size, the neck was short and stocky, the body was plump and full-chested with a relatively horizontal posture, and the medium-length wings covered a short tail. The legs were unremarkable in both their length and mass, but I cannot now recall anything about the feet. This bird’s coloration and patterns were similar to those of the nearby, adult Herring Gull, but my impression was that the dark markings that were conspicuous on the head, neck, and sides of the breast were more obviously brown and more clouded in appearance. The underparts, rump, and tail were white and unmarked, and the back, scapulars, and most of the wings were light gray. Clearly apparent was a small, white scapular-crescent and a larger crescent of white across the tips of the tertials. The exposed primary tips were dull black, or at least very nearly black, and each feather had a conspicuous white tip. One thing that seemed a little odd to me was that the underside of the far wing showed a large, white mirror that was relatively well defined, as opposed to the uniform gray that I usually associate with an adult “Thayer’s” Gull. I did think the extent of black on the upperside of the wingtips was more limited than on a Herring Gull, however. This bird’s bill was mostly yellow in color, but the base had a greenish cast, and there was a rounded spot of red near the tip of the lower mandible. The irides were a medium to dark brown in color, and thus most unlike those of a Herring Gull, and the legs were a bright pink in color. I failed to note the color of the feet, but I also did not notice that the feet contrasted with the legs.