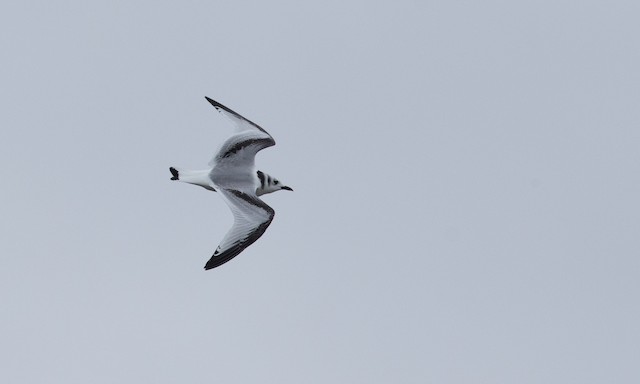 Juvenile came into bay at 10:50. It spent about ten minutes in bay and high over bay, at times with autumnal yellow of oaks making for striking odd background. It spent a couple minutes flying over group of feeding Red-breasted Mergansers, along with Ring-billed and American Herring Gulls. After that it landed for about a minute, then took off and flew back out over Lake Ontario. Striking and unmistakable. Roughly the size of Ring-billed Gull but with boldly marked upper wing with black leading edge of primaries combing with black secondary coverts to form M pattern. Broad black collar. Black tip to tail. Upperparts grayish, perhaps slightly darker than RBGU, becoming palest on secondaries and inner primaries (where much paler than RBGU). Black bill, legs and eyes. Almost entirely white from below but with outermost primary dark and black trailing edge to outer 6 or 7 primaries; black tail tip.