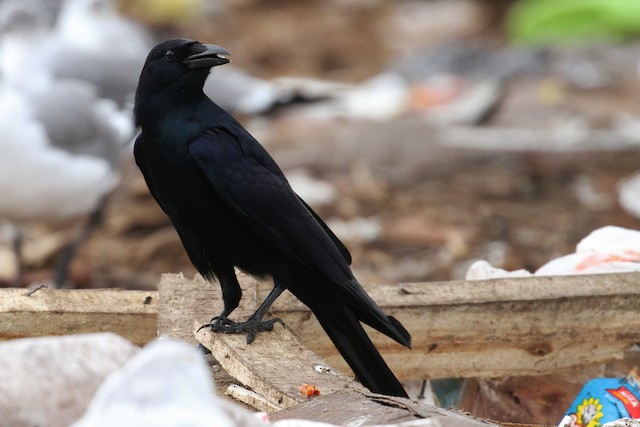 Very soon after I arrived, Matt Fraker spotted one perched with ravens on the hill to the N of the trash piles but it quickly took off with the ravens and headed NW and landed on distant powerlines. A Peregrine flushed the corvids, and multiple ravens and the crow all flew out of sight to the W. About 20 minutes later a group of 5 crows flew in from the SE, briefly landed on some fencing, and then promptly jumped into the trash and began foraging together. The group of 5 were all seen simultaneously for quite some time until about 2pm when they all left, heading low to the N. At least 3 returned to the trash pile again at 2:40pm. I suspect there were actually 6 total, but can only really confirm 5. They were much smaller than Chihuahuan Raven but chunkier and broader-shouldered than male Great-tailed Grackles. The shiny, bluish-purple gloss on their mantles was often strikingly obvious. Their calls were nasal and like a croaking frog. Many photos.