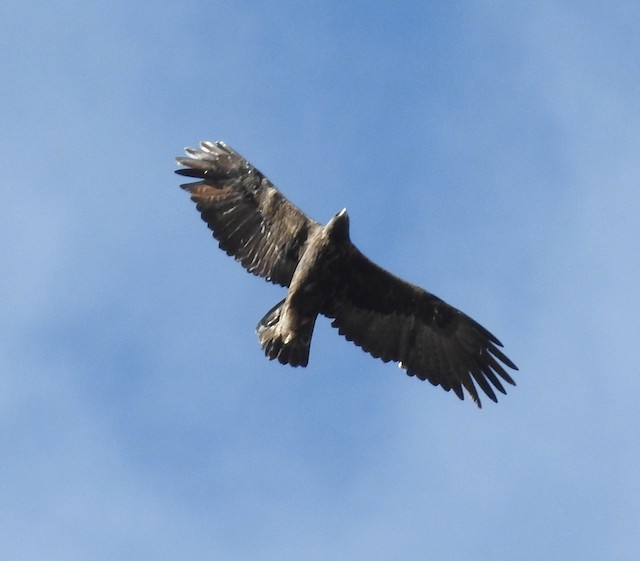 3 adults and 4 juvenile/immatures seen. Group first observed ca 1055-1107. Conditions were sunny and above freezing with few cumulus clouds. Light ca W air, with stronger westerly winds aloft, notably moving the clouds. I saw 1 adult GOEA go approximately S more or less overhead, then 6 others (2 ad, 4 imm) at once circling and eventually going more or less south (at least several of them; I may have lost track of others). Minimum count - there was a lot going on and I might have missed one or two. The Accipiter and dark-morph RTHA were associated with these GOEA, and I did not see them again. I also caught one wing of a RLHA in a poor shot of one of the GOEA - perhaps the same bird seen hunting later over reach 1? 5 more (2 ad, 3 imm) seen around 1230 - I was not able to be positive that these were a different group. Lots of high circling more or less overhead, the group apparently drifting off to the NE. Gusty moderate to strong W or WSW breeze. 7 other large, dark birds seen circling over grassy hills near Ft Harrison, S or SW of me - I thought some or most of them might be CORA.