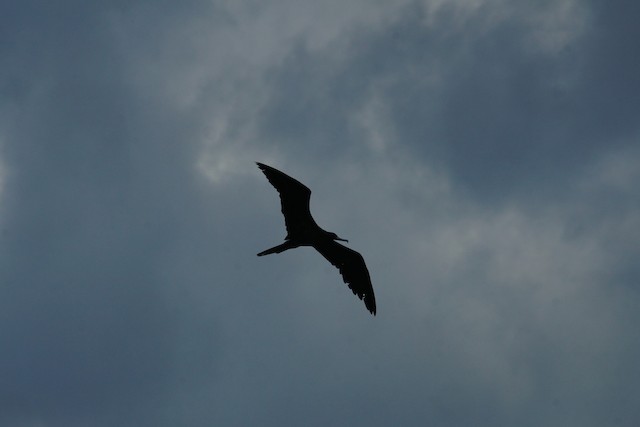 Observed and reported by Scott Barrett (Ky. Dept. of Fish and Wildlife Resources); photographed by Earl Raglin. Narrative from Scott Barrett (9/24/2017): On 9/20/17 at around 3:15 p.m. I observed a Magnificent Frigatebird. It was unusually large and graceful in flight, much larger wingspan than anything I had ever observed. The size was what first caught my eye. It was entirely black, with no other obvious marks of color, indicating an adult male. It was flying over one of our goldfish ponds here at Minor E. Clark Fish Hatchery. The wings were distinctly angular and pointed. The deeply forked tail and de-curved bill were also obvious field marks. he most impressive thing about the bird was the ease in which it flew. It was so elegant and graceful for its size. I observed it effortlessly snatch a couple of goldfish from the surface of the pond before it gained altitude and disappeared. Earl had been here for a few days taking pictures of eagles. He just happened to snap some pictures of the Frigatebird as well. I saw him take some pictures of it and exchanged information with him. Photographs by Earl H. Raglin, Sr. Presumed waif from passage of remnants of Hurricane Irma. Presume Great Frigatebird can be eliminated by extreme improbability. First confirmed state record.