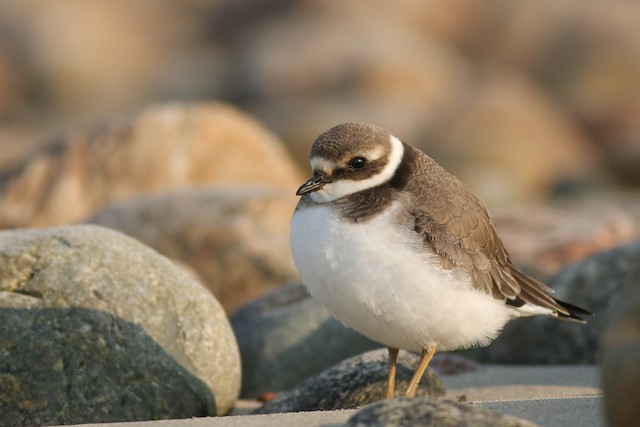 ***Mega; fourth state record and Bristol County first. I was just heading into the west side thickets just past the parking lot along the beach when I heard Marshall screaming my name (wasn't sure if I was about to be murdered or not). Did a quick about face and bolted to the parking lot and, once getting the info on the CRPL, hoofed it down the causeway towards where Evan had seen the birds land. We spent some frantic minutes scanning before ETL picked up the birds camouflaged in the rocks where he thought they had originally landed (which was just past a rusty pipe laying on the beach at the end of the west side of the causeway). Moved in with MJI and ETL upon re finding and secured photos and audio before backing off. Notable ID features: Most distinctive point that led to the original finding was the diagnostic mellow whistle with a rising, ‘too-li’. Far deeper and mellower sounding call note than that of a SEPL’s high ‘chuwit’. Larger than surrounding SEPL by at least 15%. Minimal webbing only between outer and middle toe and not between inner toes as to a SEPL which has more extensive webbing in the outer toes and also slight webbing on the inner. Orbital ring completely dark and nearly invisible. Longer and thinner bill; SEPL’s shorter and more stubby. The lore-gape junction is visible where the white throat meets the gape and lore, however, on a SEPL the white throat meets with the lore just past and above the gape. Not noted in the field but clear in the photos. Also noted a rather crisp scaly mantle, though, I was unable to find any references that noted this as a safe separation from SEPL which can sometimes have a rather similar feature (I was unable to find any photos of juv. SEPL with scaling this pronounced on the mantle, though). Also, quite noticeably pale. Subspecies is hiaticula I presume? See also for more extensive notes: http://ebird.org/ebird/view/checklist/S39128733 http://ebird.org/ebird/view/checklist/S39128271